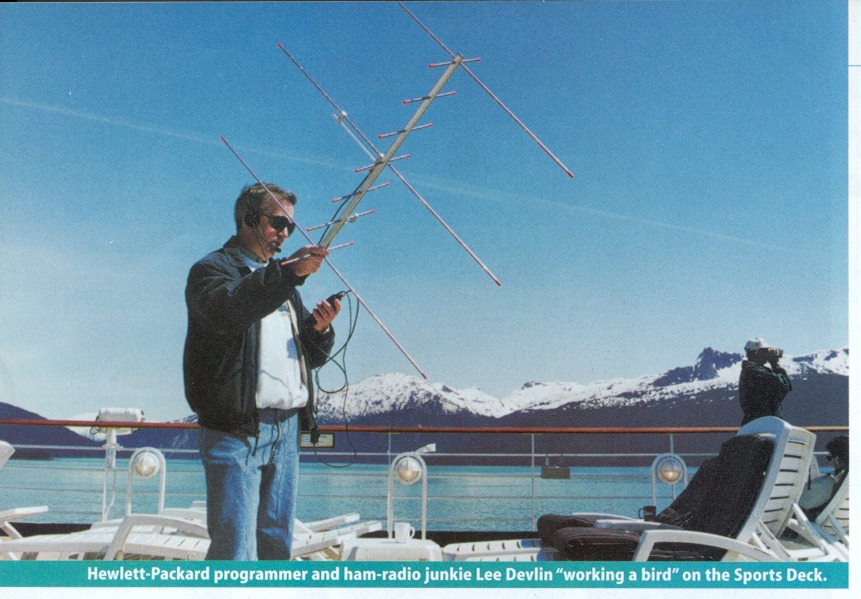 It was an honor to get my picture in Wired Magazine (October 2000, Page 148)  as part of an article on the Perl Whirl.  The real bonus was getting some of the article dedicated to ham radio.  It's unusual to have much ham radio coverage outside the regular ham radio magazines.  Other ham activity covered in the Perl Whirl article was that of Steve Roberts, N4RVE (www.microship.com) and Steve Dimse, K4HG, (www.findu.com). Steve Silberman, the author, did an excellent job at capturing the essence of amateur satellite communications.

Here is the excerpt from the article:

"Lee Devlin must have appeared to the non-geek passengers as a kind of otherworldly wirehead, striding around the deck of the Volendam in his sunglasses, carrying a metal Christmas tree pointed into the sky.

What he was actually carrying was an antenna aimed at a small object skimming just outside the atmosphere. Lee was "working a bird," as they say in ham-radio parlance: transmitting and receiving radio signals from a low-orbiting satellite. While Lee was in the satellite's "footprint" the crackling voices of other hams cascaded in an enthusiastic cacophony of greeting, as if Lee had opened the door to a room containing a small crowd of guys waiting for him. This crowd, however, was scattered all over. "This is Randy from Park City, Utah ... Southeast Arizona here, howdy to everybody on board the ship ... Hello from Idaho Falls, Idaho ... This is Travis Air Force Base."

'This is K0LEE,' he answered, 'aboard a cruise ship off the coast of Alaska.'

A convergence of technologies in recent years has made this kind of low-res, high-altitude conversation possible. Inexpensive handi-talkies allow hams to exchange signals with the birds and transmit data about their location. The satellites themselves, sponsored by universities and amateur radio organizations like Amsat (www.amsat.org), are sent up in place of ballast on larger commercial spacecraft. Hams can even work the Mir space station and gab with the cosmonauts, who welcome this diversion from the tedium of space flight.

Programs are available on and offline that calculate the orbits of the satellites; hams can use these to help them aim their antennas as the satellites pass overhead, opening the door to conversation for 10 to 15 minutes on each pass, for four to five passes per day. Satellite radio enthusiasts have subdivided the globe into thousands of rectangular blocks called gridsquares. When a conversation is successfully executed via satellite from a location for the first time, a new gridsquare is said to be activated. By heading out twice a day with his handi-talkie, Lee activated 15 new gridsquares during the cruise, chatting up hams from Alabama to Nome. One of the passengers from the boat's general population seemed particularly interested in what Lee was doing. After the satellite passed over, he walked over and introduced himself - with his ham-radio call sign."