This is a LongEZ I bought in July of 1996. I have since flown it to the EAA Oshkosh Airventure Convention 13 times.   It's a delight to fly and even though it uses the same 108 HP Lycoming engine as my Colt, it flies about 60 mph faster.  It has a top speed of about 150 kts (180 mph), but I generally cruise at 140 kts at 2500 rpm (160 mph.)   This plane was designed by legendary aircraft designer Burt Rutan.   The design is known as a 'canard pusher' because the little wing up front is called a canard, and the engine is in the back, which pushes the plane forward, much like the engine on a jet. 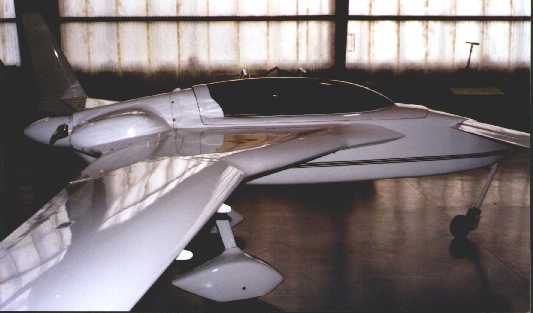 This is a side view of the plane. Note that the front wheel is extended. It retracts when flying and also when it is parked. In this case, there are weights in the front seat to keep it from tipping over backward.

This is the normal parked position. The most frequently asked question about the plane is why it has to park this way. The answer is that it is perfectly balanced on the main wheels when no one is sitting in it. If you leave it parked like that, a wind can tip it over backwards. This is a very stable parking position and it will stay put like this even without tie downs in heavy (~50 mph) winds.

I often get asked about John Denver's fatal accident in his LongEZ.  The initial story was that he ran out of gas which is not really a reason for a plane to nose into the water at a high rate of speed. The accident was actually caused by a combination of events, none of which would have caused a fatal accident  by itself, but combined together resulted in the loss of this talented entertainer.  Read the NTSB Accident report here.

Another question I am asked frequently is, 'How can I buy a finished LongEZ' and whether I'm selling my LongEZ. Mine is not for sale, but David Orr can help you find a LongEZ for a 3% finders fee.  He can give you some very useful information on what to look for in a used plane and maintains a list of planes and projects for sale.  He goes to all the canard events and so he knows a lot of the owners personally. You can reach him via email at: canardfinder@worldnet.att.net   You can find his website here. Please let him know you found out about him from my website.

I should mention two other Rutan aircraft as well.    Burt's first set of homebuilt plans was for an airplane called the Vari-Viggen, a canard pusher which featured a Lycoming O-360 engine, and fully retractable gear.  This aircraft was difficult to build and so it didn't achieve much success either in the number of plans sold or number flying.  Rutan  followed that up with the Varieze (pronounced Vari-Easy) which was in many ways, the opposite airplane from the Vari-Viggen because it was so simple.  It looks very much like a LongEZ.  The price range for these aircraft run between $15K-$25K.  The Vari-eze created a sensation when it was introduced because it was based on composite construction and was very inexpensive and easy to build.  However, it was so minimalistic that people started adding features that made it too heavy, such as electrical systems, starters, and bigger engines.  So in may ways, the LongEZ became the perfect homebuilt canard airplane after trying two approaches to the canard design, the first one too complex, the second one too minimalistic, and the third one 'just right'.

I'm currently have a Cozy MKIV under construction which is the only plans-built canard aircraft available today.  It shares many of the features and a lot of the construction techniques of the LongEZ except it is a 4-place airplane and has a larger engine.

This is a Cozy MKIV I am building. Click on image for larger view.

Here are a few other LongEZ/canard pages:

If you're curious about Burt Rutan and would like to know more about him,  I've read this book and highly recommend it.  It covers much of his biography and his aircraft designs up to the point where it was written in 1991 which includes all of his homebuilt aircraft designs.  Burt has promised to write an autobiography at some point in his life but I think he's too busy designing spacecraft now to take the time to do it.

See the more creations of Burt Rutan at Scaled Composites