In the year 2000, I taught myself to fly R/C airplanes with a new flying wing design called a Zagi. You can find out more about these nimble aerobatic electric R/C planes by visiting the Trick RC website.

I had started building a gas-powered R/C trainer many years previously and gave up part way through because I realized how hard it was to find a place to fly the plane, and it usually meant joining a club and traveling at least 45 minutes to get to the field.  I also knew that my 40+ hours of work would be undone after just a few minutes into my first flight, if all went according to plan.  Then I discovered an electric plane called a Zagi that looks like a delta wing that was not too expensive and only takes about 6 hours of work before you can get it into the air.  It's also very crashworthy.  The Zagi isn't the easiest plane to learn to fly, but you won't get bored with it after you've managed to keep it from crashing.  Best of all, it can be flown in many more places since it doesn't make much noise and does not require a lot of space.  Any soccer or football field is a potential flying field as long as there are not many obstacles near by.

I would advise anyone thinking of learning to fly R/C airplanes to download a free simulator so that you can master one of the most challenging aspects of R/C flying and that is to learn instinctively to reverse the controls as the plane is coming toward you.   After a few hours on the simulator, you'll be able to fly your plane without crashing it nearly as frequently.

Here are the links to the free simulators I recommend:

FMS download page. It takes a little to get the software up and running since it defaults to the German language, but the graphics and controls are very realistic.  You can change the software over to English after you install it by selecting English under the menu item 'Sprache'.   A joystick is definitely recommended but you can control it from the keyboard too.  In fact, some of the controls are only available on the keyboard.

Ron's software page  This software program, FlyRC,  allows you to run a DOS compatible simulator that has a few Zagis as part of its regular aircraft database.  I found the models to seem to be over-powered so it's not as realistic as flying the real thing, but it will definitely get you to understand how to reverse the controls when the plane is flying toward you which is probably the most critical skill to learn.

The Zagi 400X was the replacement for the Zagi 400 and with its 1700 mah battery, you could fly it for at least 10 minutes before needing to land it and recharge the battery.  The original 400 had the advantage of a much lighter battery which has 500 mah of capacity.  Flights were shorter, but the lighter weight does make it easier to fly.  I have a 400X with both the regular 1700 mah  heavy battery and the lighter 500 mah battery and I find that I can fly much more easily with the lighter battery, although my flights are much shorter.

The most important factor in learning to fly the Zagi is to make sure it is properly trimmed.  This means that it will not try to climb or descend on its own nor turn right or left.  The easiest way to insure this is to find someone with RC flying skills, preferably with a Zagi, and let them fly it and trim it for you first.  Then, when you take to the sky, you won't be focusing 100% of your concentration trying to keep it from crashing.  An improperly trimmed Zagi is a handful and will take most of the joy out of flying it.

Here are some Zagi  and electric R/C links to get you started:

Yahoo Discussions Group page on the Zagi  is a great place to read through the archives and post questions to many other Zagi enthusiasts.

E-Zone is a site dedicated to electric flying aircraft of all kinds with lots of information and discussion topics.

UPDATE: 2013-01-01
There have been two major developments in electric RC flight in the past few years, namely brushless DC motors and LiPo batteries so I thought I do a quick update of the Zagi since the company is still selling them and they have gone through several iterations since the introduction of the 400/400X way back in 1999. Here are some of the other models introduced since I first wrote up this page:

Zaggi Zijji Current production (introduced 2007): new white tray with separate aluminum motor mount. Motor uses 6061 aluminum water-jet cut for face mount of either in-runner or out-runner brushless motors (although only the in-runner version is available for ordering on the website). 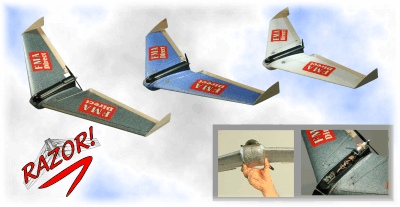 After learning to fly the Zagi, I purchased an FMA Razor.  I wanted to try out a different  airplane and the FMS Razor was very similar to a Zagi, yet still had some important differences.  I had crashed my Zagi one day after 'fixing' the pushrods to give me more throw, which made it a bit more of a handful than it was before the fix.  Flying it in a strong wind didn't help either.  The battery on the 400X is directly behind the receiver and, because it is so heavy, it has a tendency to impact the receiver when you nose it in.  On this particular flight, the battery impacted the receiver with such force that the crystal was damaged and needed to be replaced.   The servo connectors were sheared off too, for the second time, making it much likely that I'll move the receiver to a new position when I fix  it.  Of course, the crystal wasn't in stock so I began thinking about a plane to fly in the meantime.  I had looked over the FMS Razor and thought that it had many of the desirable characteristics of the Zagi, yet had several improvements.  Here is a list of things that  I liked about the FMS Razor:

The downside is that the FMS Razor may is not as easy to repair in the case of a catastrophic crash.  Fortunately, most of my really bad crashes took place on the Zagi while I was learning to fly so I can't really compare how easy it is to repair a Razor after a serious crash but I would give the nod to the Zagi.  I can tell already that the winglets are not as durable since they won't 'give' like the ones on the Zagi.   So, here are the downsides to the FMS Razor:

If I were to do it again would I purchase the Zagi first?  I'd have to say, 'Yes'.  The materials to repair or even rebuild it are readily available and I can't say for sure that the FMS Razor is any easier to fly.  It just seems that way since I had already learned how not to crash with the Zagi. The weight of the FMA is significantly more than the Zagi, and that means it's not nearly as nimble. Shortly after writing this, FMA stopped selling the Razor, so it looks like the Zagi is the best choice for a flying wing.