The last time I blogged about Podcasting, I was just learning a little about it myself and now that I’ve had a chance to explore the Podcasting world a bit, I’m starting to figure out who’s who. I found that the definition of Podcasting on Wikipedia is a good starting point if you’d like a very succinct definition. Podcast Alley is a good site where you can find the top 10 podcasters, based on a voting scheme that appears to be changing to avoid voter fraud. You’ll notice that currently at the top of the list is the Dawn and Drew Show, brought to you by a young married couple Podcasting from an old farm house in Wisconsin. Typical of much podcasting, the commentary is very raw, a little like a George Carlin routine, so be forewarned in case you are offended by that kind of language. 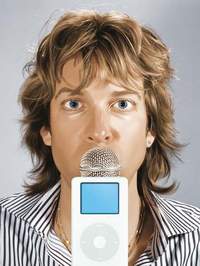 Adam Curry is considered the ‘Godfather of Podcasting’, and his is an interesting story. He was a VJ on MTV from 1987-1994. That’s the exact same period of time I was living in Amish country about 5 miles from where they filmed the movie ‘Witness’ and without cable TV, I wasn’t able to tune into MTV for the entire duration so I never saw Adam’s shows. After we moved back to Greeley, CO, and joined the rest of civilization with cable TV, I found that the music world had passed me by and that they invented a new station for my generation called VH1, MTV having been co-opted by a new generation of rap/hiphop lovers and weird reality shows. In any event, Adam does an amazing job with his very professional ‘radio voice’ podcasting from a cottage in the UK where he lives with his wife and teenage daughter. He’s always experimenting with his recording setup and manages to sound great whether he’s doing the podcast from his car, an airliner at 42,000 feet, or even while emptying his dishwasher in the process.