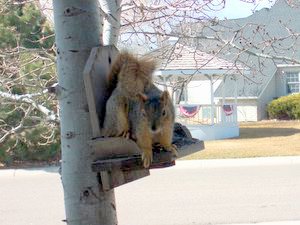 It’s hard to believe that it was getting into the 50’s and 60’s for the past few weeks and today we’re getting snow. Even our cat’s pet squirrel is hiding in his nest, trying to keep warm. His sunflower seed feeder is covered with snow. We got about 4 inches last night, but the streets and sidewalks were still warm enough that I don’t think we’ll need to be shoveling any of it today. They are calling for several more days of cold weather though, before it gets back up into the 50’s. This is pretty typical for springtime Colorado. One day you’ll be walking around in short sleeves and the next day you could have blizzard conditions. 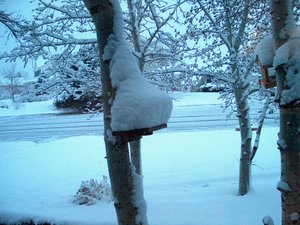 It was 22 years ago that I left home, my Penn State engineering degree in hand, to drive across the country and take my first job at HP in Fort Collins, CO. The trip started off easily enough, stopping in Columbus, OH the first night to visit a friend. The next day after a late start, I got as far as Kansas City. On the third day, I left Kansas City and noticed after about an hour that my arm was getting tired from holding the car on the road due to a persistent 30 mph crosswind. The temperature began dropping and it started to snow. Soon, the roads were getting very slippery and I began to see tractor trailers pulling over to put chains on their tires. I decided to pull into Colby, KS and see if I could get a hotel room. It’s a good thing I did, because they had closed I-70 at the Colorado border. I had to wait out the storm for 2 days in the little town of Colby, experiencing my first taste of how fast the weather can change out here in the west.

In some ways, it feels like an eternity since that trip across the country and in other ways, it seems like just yesterday. In the meantime, I’ve worked at all three HP facilities in Northern Colorado, and now I’m back at the place where I started in Fort Collins. HP’s Greeley Division shut its doors in 2002 and the property has been sitting idle ever since. The reason we bought our house in Greeley was so we’d avoid a long commute ;-). My commute was so short I could ride on a bicycle when the weather was nice. 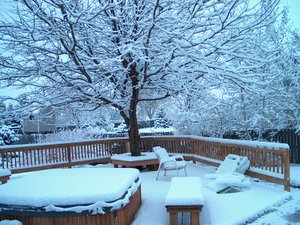 For a period of 7 years we left Colorado and lived in Pennsylvania, but after being away for that time, we missed Colorado and decided to return. Things were growing here and opportunities abounded. Another 10 years have passed and the economy still seems pretty strong here if new construction is any indication, but the high tech economy is still flagging and just hanging on to a job is a challenge.

But I’m sure things will change. They always do so it’s best not to dwell on the negative. In fact, the sun is now starting to shine, I see patches of blue sky, and Mr. Squirrel has emerged from his nest to see what goodies lie beneath that pile of snow.