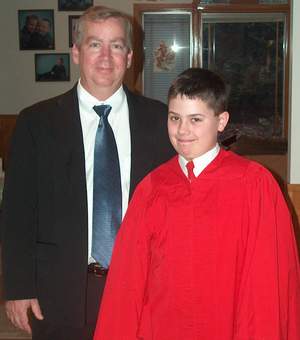 I was in Pennsylvania last week for my nephew James’ confirmation. I had the honor of being his sponsor. I’m sure if they gave out awards for the farthest traveled, I would have won hands down. It was a short trip, just a few days which we spent mostly with Terri’s sisters. I did get to go flying with my friend John. We rented a plane from the Forty Fort aiport and flew all over the back mountain and as far north as Towanda where we landed and then followed the Susquehanna river back down to Tunkhannock. I got some nice pictures of the Nicholson Bridge, but forgot my camera at Terri’s sister’s, so I’ll have to wait until she mails it back to me before I can post any of them. The Nicholson Bridge, built from 1912-1915 was the largest concrete bridge in the world at the time of its completion and is still in use today.

Bishop James Timlin performed the confirmation cermony and he was a very engaging and charasmatic speaker. I was surprised to see him there because he officially retired in 2003 at age 75 but there he was, in a role it seemed he was born to play. If you were to ask a Hollywood director to cast an Irish Catholic Bishop, he’d have a hard time coming up with one who’d fit the part better than James C. Timlin. One thing that sets Timlin apart from other Catholic Bishops is that he has been a pilot for over 45 years and flies his own Beech Debonair. I remember reading about this a while ago and because of my fascination with all things that fly, I couldn’t help being impressed. Even growing up it seemed that the Catholic priests had some pretty nice pads and cars, despite that vow of poverty…or maybe that was for nuns :-).