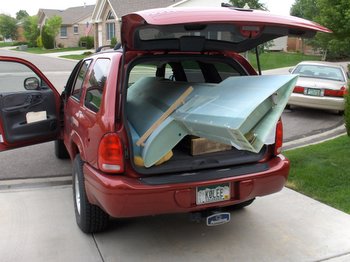 Don and I moved one of the Cozy wings out to the hangar yesterday so that we could complete the attachment of the winglet. We had debated putting the winglet on while the wing was still in Don’s basement and I’m soooo glad we didn’t try that. Getting the 10+ foot long structure out of his basement and through his pristine living room without scratching or denting any of his walls or furniture was nerve-wracking enough. If the winglet had been attached, it would have been impossible and what an embarrassing story that would have made. After we get the winglet attached, we can hang it up on a wall in my hangar and do the same with the next one.

I’m amazed that the wing fit in the Durango without needing a tie-down. It went nearly up to the dashboard and we hung the obligatory red flag on the end of it which extended about 4 feet out of the back of the tail gate. I drove very carefully to the airport with Don keeping a watchful eye on the wing from behind. Of course, with one end of it rubbing up against my shoulder, I’d be the first to know if it was in any danger of slipping out the back. The fuselage made a similar trek last summer in the Durango with just a few inches to spare. Terri helped me move it so we could make some room in the garage for her Ducati.

Hopefully, this will allow us to move forward with the next steps of the construction.