It’s been a few weeks since I’ve written anything so I thought I’d go ahead and put down a few words just to show what I’ve been doing. I got my motorcycle running last month but realized it had a battery that needed replacing. After doing that, I’ve been riding it nearly every day to work. I even took Terri’s bike to work one day just for the variety’s sake and it was a blast. Her Ducati Monster is light, nimble, and very powerful with lots of low end torque.

I was not looking forward to replacing the battery on the BMW. The battery was only 2 years old. I know, I know, I should have kept a trickle charger connected to it during the winter to make it last longer. The complicating factor is that the battery is buried under the fairing which is held on with 17 screws. I didn’t know how difficult it would be to remove and reinstall but it is certainly more work than on any other motorcycle I’ve owned. It turned out not to be as bad as I had imagined, probably on par with the cowlings on my plane which I’ve removed and reinstalled many, many times. Still, for having to do routine maintenance, such as topping off the water levels in the cells, 17 screws are way too many. So I replaced it with a sealed battery, which requires absolutely no maintenance.

I made the decision to go with a Hawker PC680 sealed lead acid battery from Portable Power because I’ve heard good things about these batteries on both the BMW forums as well as from my canard buddies who use them on their experimental aircraft. So I actually bought two, one for the bike and another for the plane because its battery will need replacing soon too. The only issue about these batteries is they don’t have posts like regular batteries, so I had to fabricate posts from copper pipe. It wasn’t too difficult. I just squeezed some 1/2″ dia copper pipe in a vice, bent it, drilled it, and then did some trimming on the band saw. You can see the results here. 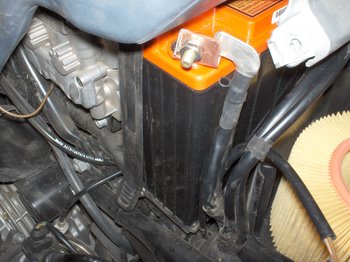 The next item on agenda is doing the annual inspection on the airplane. It’s due this month and so I better get to it before I find myself grounded. My friend Don also wants to finish the wings on the Cozy that we’re building so it is time to get them out of his basement and to the hangar where we can fit them to the spar and fuselage and install the winglets.

I’ve heard the expression that a man’s life is complicated in proportion to the number of vehicles he owns that have internal combustion engines, and I can certainly understand that claim. What I really need is one of those Airspeeders they used to get around on the Star Wars movies. That could replace my Durango, motorcycle, and airplane in one fell swoop and would do away with those pesky internal combustion engines too