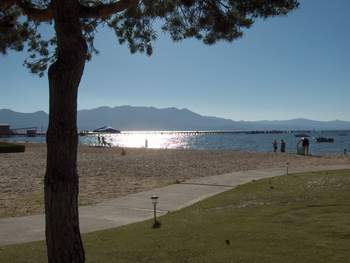 Terri and I visited Lake Tahoe last week in the LongEZ and had a wonderful time there. For the past several years, I’ve been trying to get Terri to go to Jackpot, NV on the 4th of July weekend to attend a racing event for people who fly canard aircraft. However, July 2nd is her birthday and attending an event with ‘airplane people’ isn’t high on her list of priorities, especially on her birthday, so she has always resisted my offer. This year, I added a twist to it, based on her suggestion, that we spend the rest of the week relaxing at Lake Tahoe.

So bright and early on her birthday, we loaded up the LongEZ and flew from Greeley to Jackpot along with our friend Don Douglas, a veteran attendee of the Jackpot R.A.C.E. events. 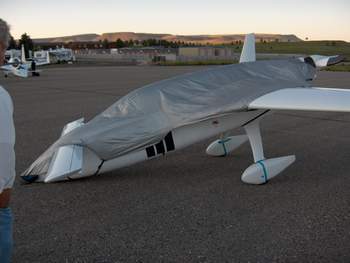 I was a little worried Jackpot would be a hot, isolated, desolate, dustbowl, which would match my mental images of all the little towns in Nevada in the summer. Fortunately, Jackpot turned out to be a little oasis complete with a beautiful hotel within walking distance of the airfield that has a casino, restaurants, a swimming pool, and even some mature trees to provide shade. The last feature was definitely unexpected for me, since I didn’t know that any vegetation other than cactus grew in the lower-lying areas of Nevada. Best of all, Terri LOVED it, especially the pool! We got to meet a bunch of other canard aviators and even though we weren’t racing, I got to feel the excitement of the event vicariously through those who did enter the race. 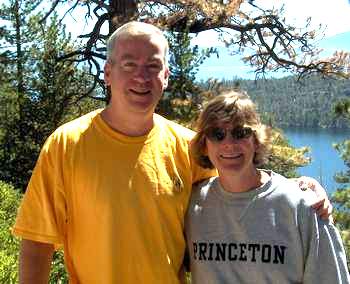 I counted about 19 canards, as well as a few other planes of various lineages. I wished we could have stayed there longer, but we had reservations at a condo on the beach at South Lake Tahoe, so we only spent a night at Jackpot. However, now that Terri has had a chance to visit the place, she is a LOT more willing to return and looks forward to lounging around at the pool while I run off to do my ‘airplane stuff’ ;-).

We had originally planned to fly into the airport at South Lake Tahoe, which has a long runway and would have been only a few miles from the condo, but they didn’t have a rental car available, and the rental car counter wouldn’t be open for several days because of the July 4th holiday. 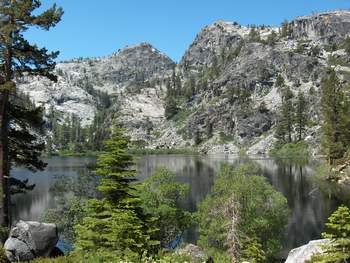 So we decided instead to land at the international airport at Reno and make the 1.5 hour drive from Reno in a rental car. This had several advantages, the first being that Reno has an 11,000 foot runway, a 24 x 7 FBO (Jet West), and is only at 4400 feet in elevation vs. 6200 at South Lake Tahoe, so it is better suited for a heavily-loaded LongEZ on a hot day. The people at Jet West really rolled out the red carpet and so we were pretty happy with the choice. In addition, I needed to fix a hot mag on the plane and they let me roll the plane into the hangar and provided me with an A&P mechanic and tools to attend to the task with minimal hassle.

We got to hike around the Lake Tahoe region and it is a truly beautiful place. We hiked Cascade Falls and Eagle Falls and I’ve provided a few photos here of those places. 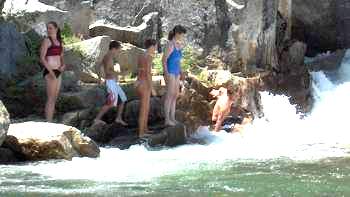 The Ponderosa Ranch was also on the places to visit list, provided we could find it. When I was a young boy, my dad visited the Lake Tahoe region during one of his business trips and brought home some pictures of the Ponderosa Ranch and so we were determined to visit this tourist attraction. Unfortunately, we found the Ranch closed, presumably for repairs but we did some reading up on the place at the Mark Twain bookstore in Virginia City.

If you’ve ever watched any of the 480 (!) episodes of Bonanza, you’ll undoubtedly have the burning image of the map of the Ponderosa Ranch etched indelibly into your mind, and you’d notice it bordered on Lake Tahoe. Other cities on the map included Reno, Virginia City and CarsonCity. I realized these cities where not in the correct place until I looked closer and found that the map had the direction of EAST pointing upward instead of the more customary NORTH pointing upward. In any event, if the Ponderosa ever existed, would have encompassed a hundred square miles of prime real estate, which would be quite a bit for 4 people to manage.

In reality, the Ponderosa series was filmed primarily at Paramount Studios in Hollywood and around various locations in California and Nevada, including a few scenes around Lake Tahoe. It was an enterprising contractor named Bill Anderson who built the replica of the Ponderosa in Incline Village near north Lake Tahoe in 1967 after noticing that a lot of tourists were looking for it based on the map they saw each week on TV. After it was built, some scenes were filmed there, but it functioned mostly a tourist attraction, not as a film set. The Bonanza series eventually ran from 1959 until 1973, a period of 14 years, which made it one of the longest running series on TV. You can still see it daily on the TVLand channel.

After staying for 4 nights in South Lake Tahoe, we left for Greeley, covering the distance in about 6 hours of flying. That’s not too bad considering it would have taken over 17 hours of driving to cover the 1000+ miles by car.