I was listening to one of my favorite podcasts yesterday on the way to work, the Slashdot Review Podcast, and heard the host, Andy McCaskey, mention my name in conjunction with his Frappr page. Frappr is a sort of ‘mashup’ application that utilizes Google maps to allow you to put a virtual pin in a map so you others can see where listeners are located. Many podcasters are adding this feature to their websites. The nice thing about it is that you can add some text, a weblink, and even a picture. Andy’s comment was that I was pilot-in-command of ‘something’, because I had posted the picture you can see on my webpage sitting in the cockpit of the LongEZ on to his Frappr map. Andy also mentioned that it was time to get out the ultralight and the ‘geezer bike’. I guess he also has these two essential interests that a lot of technology enthusiasts tend to share… airplanes and motorcycles. The trifecta is when you are also a ham radio operator, particularly if you have a domain that is your ham (vanity) callsign.

It’s not the first time I’ve been mentioned on a Podcast. My name has come up on KenRadio several times and it’s always a thrill to hear one’s own name mentioned ‘on the air’, so to speak. It’s like having 15 milliseconds of fame. I usually take off my headphones if Terri is around, backup the program a few seconds, and let her listen to it as well. If that isn’t the definition of vanity, I don’t know what is. 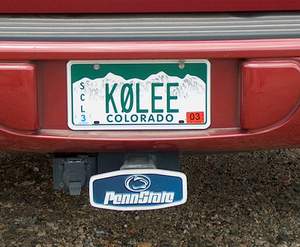 I’ve been exchanging some emails with my friend, Dr. Curt Smith, who I usually park next to at Oshkosh each year. Curt is my ‘Minister of Information’ because he knows so much about so many things. Curt recently discovered this blog while searching on the Internet for the term ‘LongEZ‘. We get along great because we share similar interests in airplanes and motorcycles. Today he mentioned that he’s had a ham radio license since 1959! Another trifecta! I feel like the ink is still wet on mine since I’ve only had it for 30 years :-). We don’t agree on everything, since we both have different political affiliations and are alumni of rivals schools in the Big 10 conference. But I have to admire Curt’s commitment to his alma mater because of his recently acquired OSU tattoo which definitely trumps my closet full of Penn State regalia.