One of my goals from as early as I can recall has been to ride in the Alps on a motorcycle. Not just any motorcycle, but one with enough horsepower that it did justice to the task. Even though I live close to some of the highest mountains in the lower 48 states of the U.S., I have always wanted to scale the heights of the Alps in on a motorcycle. On several of our visits to Italy, Terri and I rented a small motorbike and got to see the back roads around Tuscany and have enjoyed their stunning views. I can recall getting lost coming back to Florence from Sienna. We were traveling around in the back country and we looked up and saw something so spectacular and breathtaking, that we had to stop and see it close up. It was the fortified medieval village of Monteriggioni.

We pulled over and looked up at it because it looked so completely surreal, seeming to float above its surroundings. We forgot about being lost for the moment and reveled in the joy of finding something like this by accident. We later learned that Monterigginoni was a source of Dante’s inspiration for the Divine Comedy where he mentioned it by name. We rode up to the village and walked around inside its walls and felt the sense of history that few tourists get to experience because it’s off the beaten path. 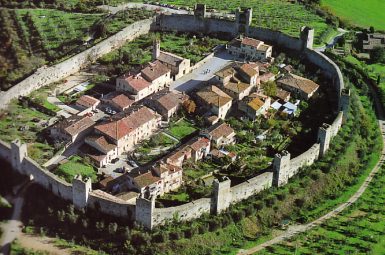