I’m back in the U.S.A. after a short trip to Taiwan. I visited Taiwan for the first time in 2000 and have been back more than a half dozen times. My dad talked of Taiwan often, since he visited it several times when he was in the Navy but he referred to it by its Portugese name, Formosa, which means ‘beautiful island’. I mentioned Taiwan in another blog a few times when I was there in January/February of this year.

Many of HP’s technology partners are based in Taiwan and so there are ample opportunities to travel there to meet with them. Lately, I’ve been traveling to discuss HP’s LightScribe technology with various optical drive partners. The Taiwanese people are hard working, friendly, and very gracious hosts. My hosts are often women professionals, and Taiwan is ahead of the U.S. in recognizing the value that women bring to the workplace, promoting them into customer-facing jobs with a lot of responsibility. They are certainly much farther ahead in placing women in these jobs than countries such as Japan, where the only time I saw women in meetings was when it was time for them to serve the tea. 🙁 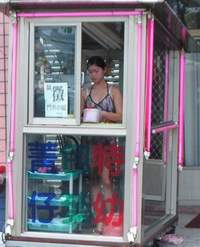 The first time I was in Taipei, Terri was also traveling in Asia and our stays in the capital of Taiwan coincided. Her trip was for 3 weeks through 4 Asian countries, so it was quite a coincidence to run into her in Taiwan and we were able to share a hotel room which was nice because we hadn’t seen each other in a few weeks by that time. The last time Terri visited Taiwan, she talked about beautiful women in glass booths selling gum. I’d had never noticed these girls or their booths. After she had piqued my interest about them, I began to look around and sure enough it seemed that they were everywhere, at least a few on each city block with the tell-tale neon lights to help you locate them. They sell gum that is made with an extract of the betel nut. The truckers like the gum and are good customers of the betel nut girls. I did a little research on the betel nut and found that people chew it for stress reduction, feelings of well-being, and heightened awareness. It contains three major alkaloids: arecoline, pilocarpine, and muscarine. I recall that in James Mitchner’s Pulitzer Award winning book, Tales of the South Pacific, he frequently mentioned the chewing of the betel nut by natives of the south pacific islands. He made it sound rather unappealing, like chewing tobacco, but I suppose if you can put it in gum form, maybe it makes it socially more acceptable. I didn’t get a chance to stop and buy any of it, but next time I may. It appears to be in the same league as caffiene as far as its addictiveness. I’ll just have to remember not to take it to Singapore with me, where chewing gum is still illegal. 🙂