Last weekend we had some visitors stop by to stay with us. Marc and Deanie Zeitlin were on their way across the U.S. as they moved from Massachusetts to Mojave, CA. I first met Marc on-line around 1995 when he had posted something on rec.aviation about starting a Cozy mailing list. I had just purchased Cozy plans and had yet to start building and I asked to be added to the list. I like to say I was his first member, but he insists I was the second, since he was the first. I still say he was the founder, but I was the list’s first member because a discussion group cannot exist if there is only one member :-). Marc’s done a great job at administering the list over the past 10+ years, a virtual centennial in Internet years. He is on his way to go work for the legendary Burt Rutan of Scaled Composites and so we had a BBQ at the airport in his honor to wish him well. Marc also wrote up a travelogue of his journey that you can find here.

At the time I started building the Cozy, I was flying a Piper Colt and had just moved to Colorado from Pennsylvania for the second time. The Colt was well-suited for the short grass fields available up and down the east coast, but was a bit of a mismatch for the high density altitude, long paved fields in the West. With a cruise speed of 105 mph, it was not unusual for cars to make better time, particularly if there was much of a headwind. With the 75 mph speed limits on the straight highways we have out west and cars tending to push that a little bit, a 25 kt headwind could be a humbling experience in the Colt. So, I thought, I already have a plane, why not replace it with one that more closely matches the one I’m building? Against the advice of many who knew better than I did, I bought the LongEZ and sold the Colt. My friends told me that once I got the LongEZ, progress on the Cozy would grind to a halt, which turned out to be somewhat true. Had it not been for the help and motivation of my good friend Don, the Cozy project would likely have not seen any progress in the intervening years. Owning an airplane is a time and money drain. It seems whenever you’re not flying it, you’re working on it or thinking about it and I expect that the ratio of working on a plane to flying is at least 2:1. So that eats into spare time that could be used building an airplane. As a result, Marc has been flying his Cozy for the past 3 years and mine is still a bunch of parts, no more than half way to being done. It’s OK though since I’ve enjoyed the LongEZ which I’ve flown to Oshkosh 9 times and haven’t missed out on having the extra room to hold the 2 more people the Cozy will provide. Terri doesn’t much care for the back seat of the LongEZ though, where she frequently falls asleep, and she tells me she’d much prefer to be sitting up front where the view is much better. If memory serves me correctly, I believe she used to fall asleep in the front seat of the Colt on long journeys, so we’ll see how much a difference a front seat will make for her when the Cozy is finally flying. 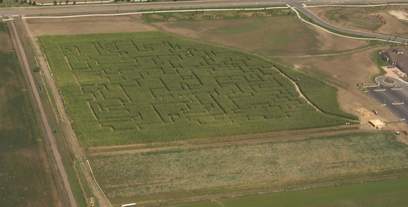 Yesterday I flew for a short while with my friend Don and took some aerial photos of a few corn mazes in the area. I had promised a friend I’d take a picture of a maze he made for a church fund raising near his home and also took the opportunity to take one of a very famous corn maze they have in LaSalle. Each year the corn maze in LaSalle has a theme and this years it’s called ‘Kings of Soul and Rock and Roll’ featuring images of Ray Charles and Elvis Presley. There is also an inflatable haunted house that looks like a giant laying it its back. 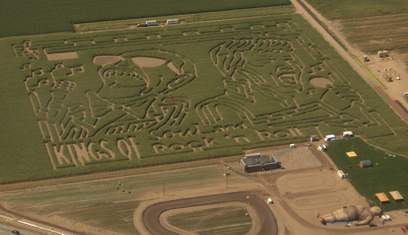 I also flew over the new Larimer County fairgrounds where they were having a motorcycle rally called ‘Thunder in the Rockies’. I had debated about taking a motorcycle ride over there, but it’s very Harley-centric and since I’ve parted with the Harley, I’m not sure how we’d fit in on the BMW and Ducati :-). Alice Cooper is performing at the event tonight. I recall that it’s been nearly 32 years ago that I bought my first 8-track tape called ‘Billion Dollar Babies’. That’s a long career for a Rock and Roll star that seemed to be living on the edge way back then. 🙂