It seems to me that Google is in the news everywhere I look. In just the past few months, there have been not one, but two books written about Google. I’ve listened to both books and to summarize: two Stanford Ph.D. candidates worked together to create the world’s best search engine right around the time that everyone knew Search was dead and portals were going to be the source of all potential income on the Internet. They had no idea how to monetize the service, thinking, erroneously as it turned out, that they could license search technology. The Google search technology is the ‘secret sauce’ that makes Google better than every other search engine available. Eventually they found a business model by selling keyword targeted advertisements (Google Adwords and Adsense) and the rest is history. Now their stock is trading at a P/E of nearly 100 and the market cap of the fledging company is over $120B. A P/E rating of over 100 in itself isn’t alarming. For example, when a company is having a down year a P/E can get quite astronomical since when you divide a large market cap with a small earnings, you can get a very large number for the P/E. However, Google is insanely profitable making nearly 50% profit on sales of $5B so a P/E of 100 is truly staggering. In order to quell this embarrassingly high profit, Google appears to be speculating in the high tech market by purchasing really cool technologies whose only common theme is that none of them show any obvious way of making money.

Don’t get me wrong, I love Google. I use it as my home page. Making things like Blogger, Google Earth, Picasa, and Google Maps available for free without the ad spam usually associated with such services is extremely generous. But I can’t help feeling that their recent buying spree shows some similarities of teenagers with a pile of cash. You won’t find them investing in any blue chip stocks, but you can rest assured that all the latest high tech toys and cool technologies are under consideration. I could hardly believe it when I read that Google bought a Boeing 767. I’ve been a pilot and aircraft owner for 15 years and have some experience with the costs of owning and operating (admittedly small) aircraft. The costs associated with running a B767 for a few executives is in the stratosphere. If you contrast a B767 with a Gulfstream 5, today’s gold standard for bizjets, it will be many times the operating cost. Also, a B767 won’t get into smaller regional airports, which is one of the attractions of bizjets in the first place, i.e., to avoid the expense and inconvenience of international airports and to arrive closer to your target destination. The complete story on the Boeing 767 purchase has yet to be written, but it’s in stark contrast to the frugal practice of purchasing Google’s 175,000+ servers as parts and assembling them by hand, presumably to save money.

It’s really not Google’s fault the stock is trading so high. People fall in love with stocks of companies whose products they use all the time, and when that company happens to be profitable, then all reason can fly out the window. Just about all companies that come in contact with such windfalls have to do something with the money, before it evaporates into thin air. So a buying spree induced by high valuation is nothing new. AOL used its unrealistic valuation to purchase Time-Warner, a company with real assets, and Time-Warner has been trying to forget about it ever since.

One of the reasons I think the Google stock price is not sustainable is because more than 99% of its income comes from Adwords and Adsense, and these revenue streams are in persistent danger of being co-opted by spammers who are creating link farms and splogs to exploit them. If there were other sources of income, or even other potential income sources on the horizon, that would add some stability. But I just don’t see it coming with the other services they’ve acquired.

I’ve been experimenting with Adsense recently on my own webpages just to see what the fuss was about. With a .4% click through rate and an average of $.30 commission per click, I won’t be quitting my day job any time soon. If I had a Starbucks habit, the Adsense income could cover me for a day out of each month. With such meager earnings for a site containing real information that gets thousands of hits per month, it seems like a tough way to make money. I suppose my click through rate could be higher if the algorithms that did keyword searches were smarter. For example, on my Ham Radio page, evidently a company that sells hams (as in the meat) has outbid the companies that have Amateur (Ham) Radio equipment for sale ;-). Similarly, the rest of the ads are equally lame pitching items that I’m embarrassed to see on my web pages. I wish I could provide Google with a list of sure-fire keywords that I know would be better target readers rather than letting the algorithms do the choosing based on words on my pages. I’ll continue to run this experiment for a few more weeks and report back if things have improved at all. If not, I’ll try something else. It won’t be for the money, but just so I can have some first hand experience with keyword advertising services.

In reading about the recent AOL stock deal where Google bought 5% of the company, all I could think of was “Why AOL?”. Considering Google’s mantra is ‘Don’t be Evil’, teaming up with AOL seems to me as the ultimate sellout. AOL is completely bereft of anything of value other than their captive audience that they hang on to with a maniacal death grip. Like many others, I was an AOL member in the 1990’s. My difficulty with them occurred when I tried to drop the service after I signed up for broadband. First of all, AOL makes it impossible to forward or even export your email, so that works as a deterrent for dropping the service quickly because you periodically need to check it for email until you’re able to notify everyone of your new email address. But the true face of evil showed itself when I called up to cancel the AOL account and got the run around from their people who would make up any excuse to prevent me from quitting the service. I was told lie after lie and thought that I’d have to hire a lawyer to get them to stop charging my credit card. The depths that they stooped to prevent me from leaving were unbelievable. The only way I was able to quit was when my credit card number got stolen and they were unable to continue charging it. So I don’t have a lot of respect for AOL. And since dial-up is so completely dead, I have to wonder what keeps their considerable, yet dwindling, user base hanging on to them. Buying into AOL seems a little like jumping the shark and I expect that the end is near. Not the end for Google, which still has the best search engine available, just for its over-inflated stock valuation.

I’ve been hearing a lot about Web 2.0 lately and was wondering exactly what is meant by the term. Wikipedia, itself a Web 2.0 concept, has the following definition:

However, a consensus upon its exact meaning has not yet been reached.

Tim O’Reilly wrote what is considered a seminal piece on Web 2.0, but even after reading it twice, it’s still difficult to articulate exactly what makes something a Web 2.0 vs. Web 1.0 concept. According to O’Reilly, things like blogs, wikis, podcasts, RSS, and Flickr are examples of Web 2.0 concepts.

One of the common underlying themes I’ve noticed is that the technologies associated with Web 2.0 are open and free. They don’t rely on proprietary software. In the event that they are web-based, they either don’t have an obvious business model (like Wikipedia, for example) or they have a lightweight advertising subsidized model that seems reasonable to most people. You wouldn’t think a Web 2.0 application would lock-in users, but some of the services seem like they are handing out free drugs with a future expectation of a creating dependent addicts who will begin to pay once the freebies run out. In most cases that I know of, when a free service suddenly is no longer free, it creates a mass exodus toward a new free service which users expect to remain free forever. Any service that costs money to run will eventually have to pass those costs on to someone, and the users of the service seem like the most likely candidates. You can write software and give it away for free, but when there are servers humming away consuming power and bandwidth, there is no end to the accumulating costs and so eventually the piper will have to be paid.

It will be interesting to see how Web 2.0 unfolds. According to Tim Berners-Lee, who just started his own blog, Web 2.0 is much closer to what he expected of the web in the first place. 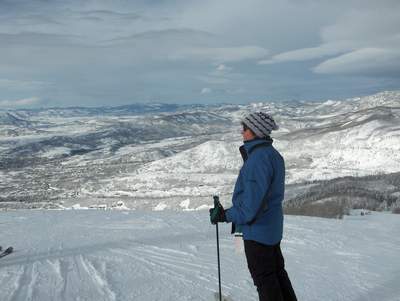 Terri and I made our annual early season ski trip to Steamboat Springs a few weeks ago and had a great time there. We really love the town of Steamboat Springs and discover new places and things to do each time we visit. Early ski season can be hit or miss on the slopes, but this year there was a record snow fall with 7 feet dumping on the ski resort in a four week period during November and early December. 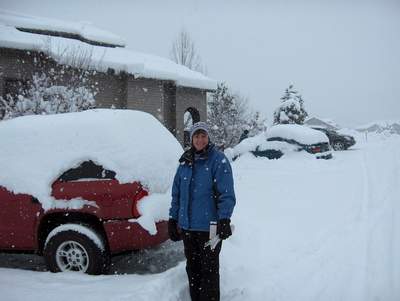 As you can see, we got a lot of snow in the time we were there, about 2 feet over a period of 4 days. The weather varied a lot which made some days ideal for skiing, but others a challenge. The last day we were there, the temperature was 20 below zero. The day before we left, we skied in nearly blizzard conditions, which makes for great powder, but leaves the ungroomed slopes a bit of work to get down. 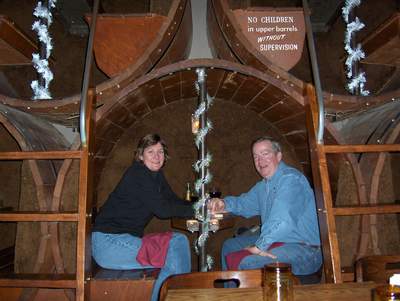 This year we dined in several of our favorite places, including Giovanni’s where we have been going for over 20 years. We’ve always noticed the Old West Steak House next to it but had never eaten there, so this time we visited it for the first time and ate dinner in a barrel. You can see from the photo that there are actually 5 barrels, including 2 that you need to climb up to on ladders! They don’t serve you dinner in the upper barrels, and drinking in them could spell trouble too. I guess as a novelty, it’s something nice to try, but if we return, I think we’ll eat at a more conventional table. The owners were there and gave us a nice tour of the restaurant which wasn’t very busy because there was a snowstorm raging outside.

Steamboat Springs has such a unique and friendly atmosphere. There’s something very authenic about its old west charm and natural beauty that keeps us going back year after year.