The word Enron is now nearly synonymous with corporate misgovernance. But what really happened there? It’s easy to remember the news sound bites, but those seemed to address only the more egregious and sensationalistic aspects of the debacle. Namely, they focused on rich corporate executives plundering a company while at the same time the investors and employees were left with nothing. Is that really what happened? Yes, that did happen, but if that’s the only lesson we take away from it, we’ll have missed the real reasons behind what went on there.

I recently saw a movie and later read several books about Enron. The movie entitled Enron: The Smartest Guys in the Room

, was based on a book

by the same name by Bethany McLean and Peter Elkind. The other books were entitled Power Failure: The Inside Story of the Collapse of Enron

by Mimi Schwartz and Sherron Watkins and Conspiracy of Fools: A True Story

by Kurt Eichenwald. Between them all, they paint a story that you won’t get from reading just one of the books or by watching the movie. Terri saw the movie and read the books as well and she felt the same way. Reading about Enron is like watching a train wreck. It is hard to look away.

Can what happened at Enron be traced to a single root cause? I think it can. The root cause of the most spectacular bankruptcy in the history of business can be distilled down to one key issue. And that is that the reward system within Enron was not aligned with the long term financial health of the company.

The system at Enron rewarded executives who did ‘deals’ with large bonuses and, in some cases, an equity stake based on the absolute size of the deal, not on how well it served the long term financial goals of the company. As a result of this policy, several executives walked away with many millions of dollars in personal wealth after helping to sew the seeds of Enron’s destruction. Despite the size of their financial windfalls, these people seemed like minor players in the affair, partly because they were gone from the company before Enron’s collapse. Those held most responsible for the actual collapse, and whose names were mentioned in all the news reports, were primarily Ken Lay and Jeff Skilling. They are certainly culpable for their part in fostering a culture that encouraged behaviors that were at odds with the investors’ and employees’ long term interests. But they steadfastly maintained their innocence, thinking what had happened on their watch was nothing more than a ‘run on the bank’, or the fault of their subordinates, and that they personally felt company was actually still financially healthy. But the balance sheet told quite a different story. They just weren’t really paying attention to it. Whether they believed their testimony or not is anyone’s guess, but they were the ones in charge and thus needed to be held accountable for the malfeasance of their underlings. Both of them had been warned on numerous occasions about accounting irregularities and both tended to defend, deny, or ignore the warning signs.

When executives are awarded sizable stock grants and stock options, it can cloud their judgment. There are a number of ways to get a stock to increase in value temporarily while at the same time jeopardizing the long term financial health of a company. A few of the more notable accounting tricks used at Enron were counting profits years before they were actually due to accrue and hiding expenses in off-balance sheet entities. These two techniques, which go against everything a reasonably intelligent person should understand at an early age, were the most damaging accounting frauds perpetrated at Enron. These accounting techniques skirted legalities while flouting any semblance of sound fiduciary judgment.

In addition to these accounting irregularities there was a perceived need to expand the company at any expense and so a lot of money was poured into risky third world energy projects which ended up losing hundreds of millions of dollars. This was unrelated to the fake accounting, yet still an important factor in Enron’s eventual demise. It was the executives’ reward system in striking these deals that caused them to get involved in questionable ventures where their own personal wealth would increase even if the deals went sour afterwards.

Another thing that wasn’t necessarily responsible for the company’s financial woes, but did expose Enron’s toxic culture, was traders’ willingness to engage in schemes to bilk the California out of billions of dollars by exploiting some flawed deregulation laws that left that state exposed. This blatant disregard for ethics exposed a rather laissez faire attitude on the part of the management as long as lots of money was rolling in. The movie features incriminating audio recordings of Enron traders conspiring to overcharge for power using schemes with self-incriminating names such as ‘Death Star’ ‘Fat Boy’, and ‘Ricochet’. Again, this alone did not bring down Enron, but it certainly exposed and reinforced the absence of ethics that permeated the company.

I think that these books about Enron should be required reading for all corporate executives and the story of Enron should be a mandatory case study for all MBA programs as a cautionary tale. I found the stories behind the fall of Enron to be as fascinating as they were educational. 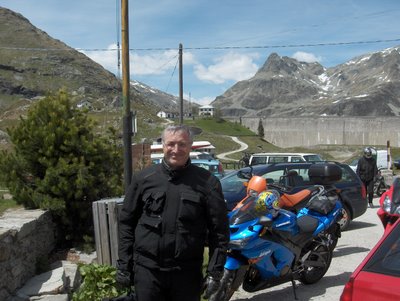 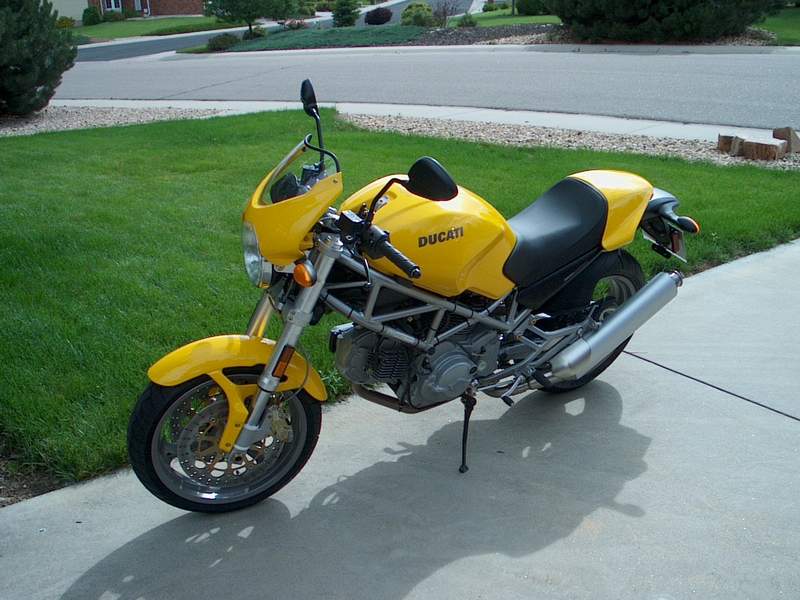 Here’s a short posting to show some of the progress on the Cozy. The Cozy was derived from the LongEZ and uses identical construction techniques. The main difference is that it is a 4-place airplane whereas the LongEZ is a 2-place. 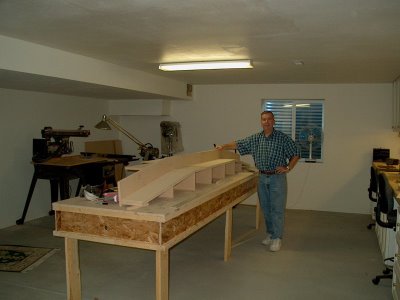 This is the jig in which the main spar is built. The main spar is a box beam that is very strong. The wings attach to the spar and it is a major structural component of the airframe. 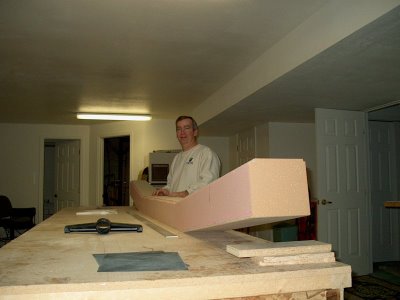 The part that makes up the shape of the spar is just foam, but it’s covered with many layers of fiberglass and epoxy which give it tremendous strength. 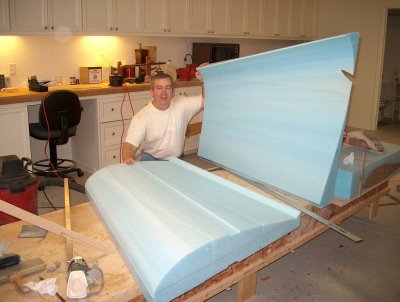 The wings are made of foam, fiberglass and epoxy. The shape of the wing is cut using airfoil templates with a ‘hot wire’ saw to give it an airfoil shape. This is probably the most fun part of building a composite airplane. In just a few minutes you go from a block of foam to something that looks like it belongs on an airplane.

The wing needs to be assembled in a jig to maintain proper dimensions. The jig also helps to set the sweep and twist of the airfoil. 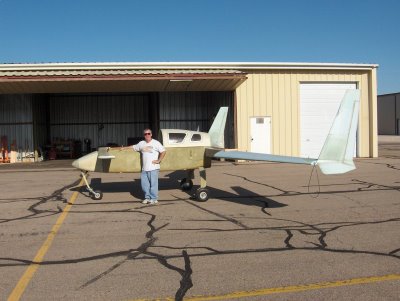 The spar and wings attached to the rest of the fuselage.