In order to properly capture the details of an experience, it’s important to write them down quickly so as not to have life intervene and fill your head with the urgent day-to-day things that distract you. So it’s with some embarrassment that writing this account of our European vacation has taken more than two months and I’m still not done. I’m beginning to wonder if I can do it justice with that much of a time lapse. Fortunately, I scribbled a few notes down during the trip to keep track of where we were on each day and of course, I have the pictures, which is a great help because they are in chronological order thanks to the numbers applied to the filenames by the camera. So before writing, I can refer to the pictures and stitch the trip back together in my mind. 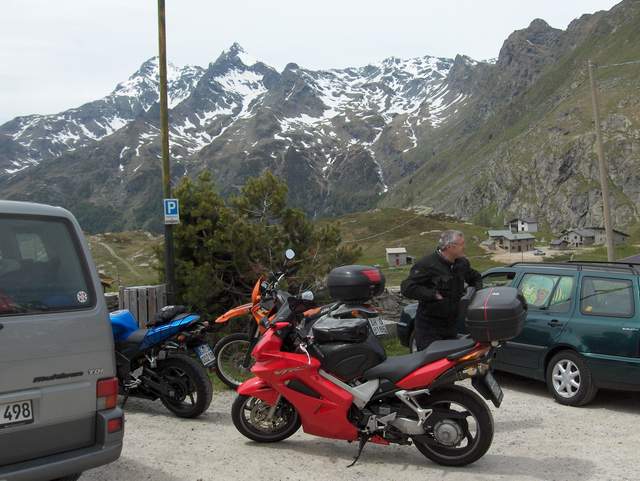 Our third day in Italy would be the day we would take the long-anticipated motorcycle ride, something that Silvio and I had first starting talking about nearly 8 months prior to our trip. Silvio rides his bike nearly every weekend in the summer and the fact that he has nearly 20,000 km on the odometer after one year will attest to the fact that he does a lot of long trips. Silvio’s daily commute is less than 2 km each way and so that hardly registers on the odometer. And this is his third Honda VFR in 6 years. With each new bike he accumulates miles faster than with the previous one.

I ride my BMW just about every day from March through October and have only managed to average about 5,000 miles a year and that’s primarily due to my daily commute which is about 40 miles round trip. When I graduated from college more than 20 years ago and had fewer hobbies and distractions, I took quite a few trips with my motorcycle friends into the Colorado mountains, camping out each night and covering as many as a 1,000 miles in a weekend. I have many fond memories of traveling to Colorado’s mountain towns and experiencing many of them for the first time on a motorcycle. I’ve also taken a few rides to South Dakota’s Black Hills, including visiting the Sturgis Motorcycle Rally on two occasions. Terri and I also visited in Yellowstone National Park and Montana on a motorcycle, back when we were much younger and could endure 500 mile days of motorcycling (and that was after working for half a day ;-). Our longest trip was on the Harley and lasted 10 days stretching from Pennsylvania to Wisconsin and then through Ontario, Canada and coming back through Niagra Falls. We had also taken the Harley on a trip from Pennsylvania to Maine and back.

Now we just take leisurely afternoon cruises up into the mountains and are home by dinner time.

The previous day we had ridden about 100 miles to Lecco and back so I was feeling comfortable on the VFR. This day we’d be riding with two of Silvio’s motorcycle friends, Stefano and Luciano. Stefano spoke very good English, but Luciano spoke only Italian so we’d have Silvio and Stefano do the translating for us. Both of these men had full riding suits and 600 cc sportbikes. Stefano was riding a Honda CBR600 and Luciano was on a Kawasaki Ninja. Silvio would be borrowing a 600 cc KTM dual-purpose bike from Luciano since Terri and I were riding his VFR.

We left about 9:00 a.m. and we headed back up toward Lake Como. Prior to arriving in Italy, Silvio had proposed several routes and the Lake Como/Switzerland route one looked like it had the most scenery and altitude changes. Of course the weather in the mountains can change, and so we were willing to take any of the routes had the weather had not cooperated, but it was a very nice day, although visibility was a little limited due to humidity until we got into the higher elevations.

Silvio and his friends usually ride for an hour or two before stopping for a rest and that suited us fine since we hadn’t really taken any long motorcycle rides in a while and would be in a completely new environment. I found out that the extra horsepower provided by the VFR would be very welcome, even necessary, to keep up with these riders. Silvio and his friends seemed to be able to move through traffic like it wasn’t there and like I had mentioned in a previous posting, the practice of passing cars on a motorcycle is quite common in Italy. In the U.S., it might seem like an aggressive riding style, but in Europe, no one takes offense to it. At our first stop in Varrena on Lake Como for some cappuccino, I apologized for holding up the group, at which point Stefano informed me, tongue-in-cheek, that we’d not be able to win the speed record they had hoped, but it would be OK. I had the extra challenge of being on a new bike, with a passenger, riding in unfamiliar places and so they were very gracious in giving me some permission to lag behind, although I did my best to keep up with them so as not to spoil the trip for them. I can’t think of anything worse than having a sport bike and having to ride it slowly. 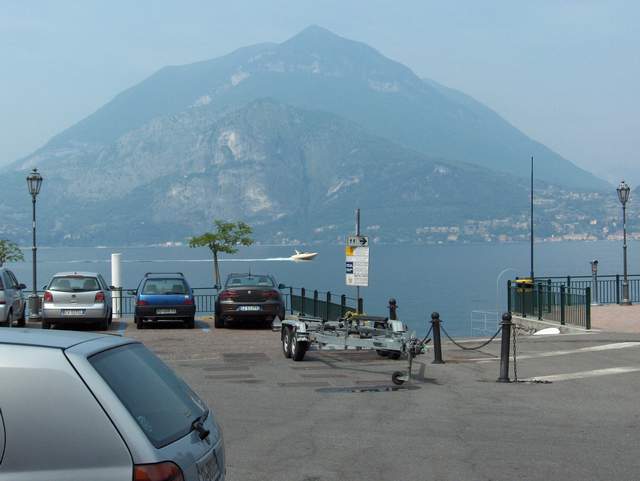 After a short stop, we were back on the road, heading north up the east side of Lake Como toward Switzerland. I couldn’t get over the number of tunnels we went through. It seemed like every few hundred yards we’d enter another tunnel. Some of them were long and dark inside and since it was sunny outside, there wasn’t a practical way to manage my sunglasses, so I had to tilt my head down and look over them when we got into a tunnel if it wasn’t well lit. After about 30 minutes, we had reached a small town of Chiavenna, and we headed to the northeast up toward the mountains through many twisty roads and switchbacks that were about as challenging as I’d ever experienced. Occasionally, we’d go through a small village, but for the most part, the road traversed the unspoiled beauty of the Italian Alps. After about another 30 minutes, we pulled into a very small village of Stuetta near the mountain pass and just below a massive dam and surrounded by mountain peaks, most of which still had a lot of snow. Nestled in this setting was a rustic restaurant, aptly named ‘Ristorante Bar’. It was quite busy since it was around lunch time but there wasn’t any problem getting a table. We had an excellent meal that included pasta that was unique to that region. It had a purple color with a kind of cream sauce, and it was very good. After the meal, we gathered outside the restaurant and prepared to enter Switzerland which was only a few miles up the road. In a few minutes, we were crossing into Switzerland at Splugen Pass. Just after passing through the entry point, Luciano pulled over and instructed us to do the same. We looked down into a mountain valley with an incredible maze of switch backs that seemed to go on forever. I could hardly believe my eyes. 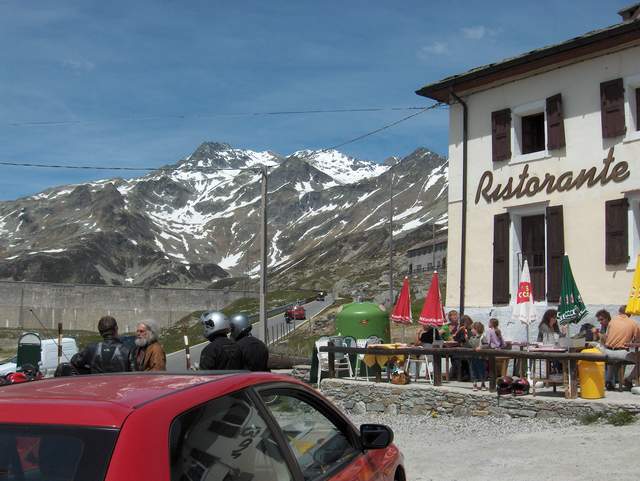 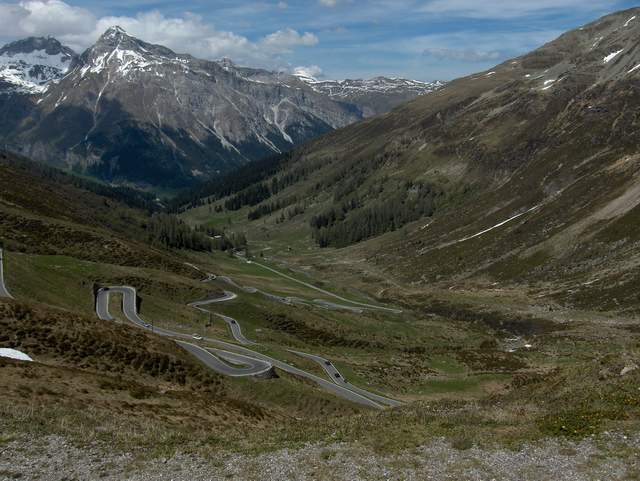 There were plenty of other cars going down into the valley, so that eliminated the potential
for a race, much to my relief, since passing cars on that type of road with narrow switchbacks wasn’t safe nor would it be easy. Terri told me later that the sight of all those turns terrified her, but after having climbed so many on the way to Splugen Pass, I figured it wouldn’t be any different and it turned out not to be. Going down allows you to better see what’s ahead, especially the traffic coming up at you so you can react accordingly. There’s nothing worse than riding through switchbacks where you can’t see on-coming traffic because sometimes people assume there won’t be anyone coming and thus will use your side of the road which is a common practice in sharp turns.

Shortly after arriving in Switzerland, we stopped at a gas station to fill our tanks. The fuel is about 20% less expensive in Switzerland than in Italy. The taxes on gas in Europe are more than the cost of fuel itself, and that’s why it costs more than 2x what we pay in the U.S., and now that fuel has nearly doubled in the past few years, they are paying nearly $8/gallon. Even though fuel wasn’t exactly cheap in Switzerland by U.S. standards, it was low enough that everyone wanted to wait until we got there before filling their tanks. We’d fill the tanks again before leaving Switzerland.

The scenery in Switzerland was spectacular. There are lush mountain valleys with tall grass and wild flowers surrounded on every side by snow capped mountains. There were mountain lakes with a deep blue color surrounded by green grass and mountains nearby that were postcard-perfect. The Colorado mountains are quite beautiful, but the Swiss landscape was absolutely stunning. Most of Colorado’s mountains rise from valley bases of 5,000 to 8,000 feet and reach to heights of 12,000 to14,000’. In Switzerland, they rise virtually from sea level. For example, Lake Como is about 650’ above sea level, but the nearby mountain peaks are 10,000’ and they tend to rise abruptly like walls of granite which greatly adds to their dramatic appeal. The roads that scale the mountains are steep and twisty, making them ideal for motorcycling. Sure, you can find easier roads through the Swiss mountains, but that wouldn’t be as much fun. After reaching the town of Splugen, where we refueled, we traveled to a gorge called the Via Mala-Schulcht which had a stairway going down to the bottom of a deep gorge. From there, we continued on and then climbed up to Julierpass and stopped again for an espresso before heading into in St. Moritz which is a picturesque ski resort. We stopped to take some pictures and then headed back toward Lake Como. The road back was pretty easy and by the time we got back to Lake Como, we stayed on the autostrata that seemed to consist of 90% tunnels. I’ve never spent so much time traveling in tunnels in my life. They were dark, high speed tunnels where we traveled nearly 80 mph. Terri later told me that was by far the most terrifying part of the trip. The tunnels made a short circuit past Lake Como back toward Milan and thus we were home after what seemed like a fairly short ride.

By the time we got back, we had traveled about 450 km, which doesn’t sound like a lot, but many of the roads we traveled resulted in slow progress, especially the twisty ones with switchbacks and those that went through small villages, so we really felt like we had done a lot of riding that day.

When asked where we’d like to ride the next day, we asked if we could do something that might be a little more relaxing, which got a big laugh from even Luciano who understood enough English to know we were exhausted after that much riding.