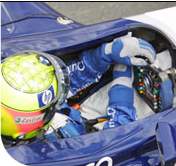 Formula One Racing season started this weekend and I’m looking forward to this season. Last year was a bit of a disappointment with the Williams BMW team having an off year. We went to the formula one race in Montreal, Canada last year and the team did great with both cars in the points finishing in 2nd and 5th place but they were later disqualified for having the brake ducts too close to the rotors. I blogged about that race here. This year there will be 19 races on 5 continents and the Williams BMW team has two new drivers, Nick Heidfeld and Mark Webber. They aren’t exactly rookies, but neither one has won a race yet, partly because the cars they drove last year were not very competitive.

I hadn’t known much about Formula One racing since in the U.S. there are too many other race events which is a distraction from this global sport. To watch it for a season is a lesson in geography as they move the race between 17 different countries. I worked on a project at the Chemical Analysis Division of HP (now Agilent) that was a joint venture with an Italian company.

The company was located in Monza, just outside Milan near the famed race track. During my visits to Italy I became good friends with my host, Silvio, and we still communicate regularly. Terri and I have been over to Italy several times and visited him and his family while we were there. He lives very close to the race track, within walking distance, and you can hear the cars practicing at the Monza Autodrome from his patio. He knows the sounds of various engines so well that he can tell you which cars are practicing by listening to the sound of their engines. Hardly a day goes by that there isn’t some event going on at the track and we got to visit the track each time we were there and saw a wide variety racing, including Superbike racing which was truly a thrill for a motorccyle enthusiast like me. We’re hoping to visit my friend again soon and would like to time it so we will get to see the F1 race from a European vantage point

1 thought on “Formula One Racing”