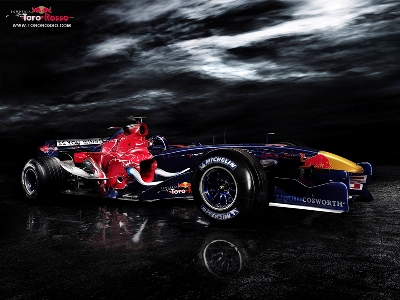 This weekend kicks off the 2006 season of Formula One racing with the inaugural event taking place in the island nation of Bahrain. This year there are many changes, including all new 2.4 L V8 engines, new (old?) tire change rules, a complicated but more exciting qualification procedure, and some new drivers. For the first time in 13 years, an American will be racing in this global event. Scott Speed will be racing on the Red Bull team. I’ve never had a Red Bull, but last weekend I bought a can of it and have been thinking about drinking it ever since. It’s billed as an ‘energy drink’. Its name comes from one of its ingredients, Taurine, which I’ve never seen in a soft drink before. After doing some research I found that it’s an acid found in urine and bile…yum! 🙂 The rest of the ingredients, like sugar and caffeine look pretty familiar to me, except for vitamin B. You don’t typically see any vitamins in soft drinks, only in ‘energy drinks’. At about $2 U.S. per 8 oz. can, it looks like it has the makings of a high margin product. No wonder they can afford to be the major sponsor of TWO F1 teams.

One of the unusual characteristics of one of the Red Bull teams is that they are taking advantage of a loophole in the F1 rules and running a V10 engine with a restrictor on their air intakes. Considering the other teams collectively spent an estimated $1B on V8 engine development, it will be interesting to see how it works out. I’m sure if the team does well, there will be an outcry from the other teams with predictable results. Either they’ll amend the rules to eliminate the V10 engines or everyone else will be scrambling to get their 2005 engines back in the cars.

Terri and I went to a Formula One race in Montreal in 2004 and had a wonderful time there. We had contemplated going to the 2005 race in Indianapolis, but had too many other commitments. I was in Asia at the time and Terri was in Europe. We were glad we didn’t go. Due to the no tire change rule and the construction of the Indy track with its high speed half oval section, Michelin advised the teams that it was not safe to use their tires. As a result, the race was run with only 6 cars instead of the usual 20, because it was restricted to the three teams running Bridgestone tires. The crowd was not happy and many left in protest.

HP is no longer a sponsor of an F1 car. It was something that was picked up as a result of the Compaq merger. Now that I have no reason to show any loyalty to a team, I guess I’ll need to root for a new team. Maybe I’ll root for Scott Speed and second Red Bull team which is going by the name Toro Rosso, which is Italian for Red Bull. Those guys are going to be the underdogs this year. Come to think of it, maybe I’ll go drink that Red Bull, er Toro Rosso, I’ve been saving…