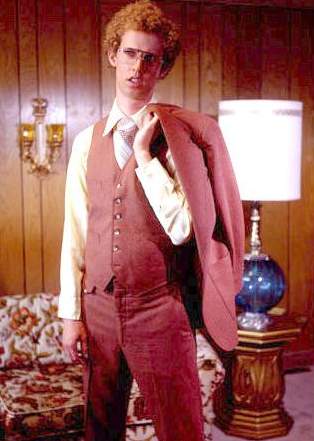 I saw the movie Napoleon Dynamite a few months ago, and I’ve been hearing snippets of it and references to it ever since. It’s a wierd movie and the main character is extremely quirky, yet not as quirky as the rest of the characters, which makes him somewhat sympathetic. I’m pretty sure that it’s the only movie to spawn a legislative bill. While watching the movie, I realized that I have met a few people who were exactly like the main character. I’m talking about people with the same look, same hair, EXACTLY the same speech patterns, and, of course, the same attitude. The first time was when I was at Penn State. The went by the nickname ‘Milt’. Milt liked punk rock, especially the Clash, and thought that they would eventually be recognized as the greatest band in the history of the planet. I am not sure anything like that is likely to happen in my lifetime…at least I would hope not.

The second Napolean Dynamite-like character I met was a dude shortly after I started working in Greeley, CO. Again, same blonde ‘fro, same mumbly speech pattern, etc., it’s almost like these guys were the result of the same alien spore. I once drove down to Mardi Gras with him and a friend and we stayed at his sister’s place along with about 20 other people and a large number of dogs and cats sleeping on a wooden floor in several inches of dust. It was a weekend to remember… but not an event I’d care to repeat.

I’m not sure why I’m even posting about this, other than perhaps to have someone wander across it and let me know that they know that they also have Napoleon Dynamite character in their past and were thinking the same thing as me when they were watching that movie :-). I can’t help but imagine that the character was based on someone the writers knew personally.

And if you’ve seen the movie, then you may just want to learn to dance like Napoleon. It seems to be a popular goal for several hundred people registered on 43 things.

Update: Shortly after posting this entry, I got an email from a long lost friend from high school who directed me to this top 10 list from David Letterman read by Napoleon Dynamite himself. It’s a classic!