Terri and I drove to Denver on Friday to borrow a Cozy turtledeck jig from Rick Maddy. Rick is doing excellent work on his Cozy and I was going to take some pictures of Rick’s shop, but forgot my camera. Then I realized that he’s recording all of his progress here so not having a camera wasn’t a big deal. Rick graciously hosts many Cozy/canard pages on his server and also provides an excellent search engine to do keyword searches through more than 10 years of postings on the Cozy and Canard Aviator’s mailing lists. It’s lightening fast and a great asset to the community. 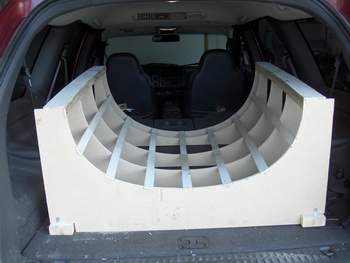 The turtledeck is the shell that goes behind the canopy of the Cozy. It’s shown in crosshatch below. Don and I were looking for an indoor job for the winter months and I’m pretty sure that this will keep us busy for a while. Some of the canopy/turtledeck construction has to be done with the fuselage, but the part where we need the jig can be done without having access to the fuselage. The fuselage is at the airport in an unheated hangar and so we won’t be doing any layups there until spring.

We decided that we’d go to the Cherry Creek mall since we were already in the neighborhood. I was surprised to find it rather uncrowded, probably because we got there in the late afternoon, despite it being ‘Black Friday’. I took the opportunity to see what was new at the Apple store and to physically handle all the newer products like the Mac mini, iPod Nano, and iPod with video. It’s obvious by looking at these devices that they are missing features that wouldn’t be negotiable at other companies. One typical requirement is that the products should be serviceable and upgradable. I’ve owned an iPod for a few years and the battery life is now at the point where it can barely get me through a 1 hour walk. I know that I’m going to have to bite the bullet and either do it myself or send it back to Apple. A cottage industry offering batteries and iPod surgery instructions arose around this controversial decision (as well as a class action lawsuit) and now Apple has tried to make amends by reducing the battery replacement cost from $100 to $60, which is probably still a profitable undertaking for them, considering all the iPod batteries will need replacement eventually. It’s hard to imagine what they might have been thinking when the original decision was made. Had they added a few small screws to the rear case and a reasonable battery replacement price, all that ill will and associated costs it generated would have been averted.

The Mac-mini is an interesting concept, but considering it costs nearly 2x what an equivalent-feature PC would cost, its small size carries quite a high premium. By the time you get it configured with the options you need, like a larger hard drive and more memory, you’re looking at $700 and that’s before adding the cost of a display, keyboard, and mouse. You could use cheap versions of each of those components, but that would be like dressing a supermodel in baggy overalls. Ideally, you’d want the Apple bluetooth wireless keyboard and mouse and a 20″ cinema display and so you would add another $920, bringing the total to $1620. That puts a new light on the entry level $499 mac mini price. You might even consider going with the 20″ iMac G5 for $1699, which is probably what Apple would like their customers to do…

I enjoy visiting the Apple Store, not so much because I’m an Apple fan, but because it provides a quick way to see everything they have to offer and give their products a test drive. Since Apple doesn’t really use very many retail outlets in the U.S., the Apple store is the best way to check it out before you buy it. It surprises me that Dell can get away with selling PC’s without any retail presence. It seems odd that someone would make a major purchase like that sight-unseen. I suppose some people just go to a local retailer, test out an ‘equivalent’ PC, and then buy on-line from Dell, thereby saving themselves the retailer’s commission.