About 5 years ago wind farms started popping up in Colorado. They are easy to spot from the air and can be seen for many miles because the structures are so enormous. A modern wind turbine can reach well over 400 feet into the air.

Over a span of less than 3 decades wind turbines have increased from an average rotor size of 10 meters generating 25KW to a rotor size of 112 meters generating up to 6 MW per turbine. The 3+ MW turbines are generally installed in the ocean about 5-10 miles off shore where the wind is steady. Land based wind turbines are generally rated at less than 2 MW. Each 1 MW of wind energy is enough power for approximately 300 households based on an average U.S. household consumption rate of around 900 kWh per month. The average power available from wind turbines, also called their ‘capacity factor’, is about 1/3 of their rated generating capacity because the wind is not constant. They make their rated power in winds about 20-25 mph and will not generate any more than the rated power even when the wind increases above that speed because it would over stress the system. Above about 55-60 mph, the wind turbine will protect itself by locking its rotor so that the blades will not get damaged.

Here in Colorado there are many locations where the wind is nearly always blowing on the plains and there aren’t any obstructions on the ground to slow it down. Other than the trees along the Platte river, there is virtually no vegetation taller than a cornstalk between here and Nebraska. And Wyoming has even higher wind and fewer trees than Colorado in the eastern side of the state.

I was out flying today and took a few photos of the Ponnequin Wind Farm up near the border of Wyoming to take a look at Colorado’s first wind farm which was built about 6 years ago. You can see a photo of it below.

If you’re curious about the Ponnequin wind farm you can read a little about it here at the American Wind Energy Association website. If you have Google Earth, you can get a satellite view of it here. Or here on Google Maps.

About 60 miles east of the Ponnequin Wind Farm, the largest wind farm in Colorado called Cedar Creek is currently under construction. During the past few months I’ve been monitoring the progress of it since it’s not far from Greeley, at least not as the crow (or LongEZ) flies, and I’m astonished at how fast it’s getting built. A few months ago, there were only a few towers standing and now they have more than 200+ towers erected. I timed how long it took me to fly from one end to the other and it was 5 minutes, flying at 160 miles an hour which means it stretches 13 miles from east to west. It’s on land that previously didn’t have much use due to sparse population and lack of water for irrigation. I did some quick calculations and realized that this wind farm will generate more than $80M/year in electricity from its 273 wind turbines, based on the average of around $.10/KWh currently paid in the U.S. by consumers. That’s not a bad return since the fuel, a major cost for conventional power plants, is free in the case of wind power. 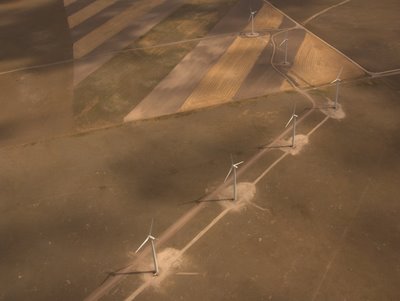 Looking down from above on these structures, it’s hard to fathom how big they are. In the picture above, the closest wind turbine has a large truck parked near its base which is virtually invisible in the photo. That gives you an approximate idea of the scale of these structures. Go ahead and click on that image to get a higher resolution photo of it and a better idea of the relative size of the truck and the wind turbine.

One of the biggest logistical issues with constructing these wind farms is getting the materials to the site. The tower sections take up most of the highway when transported and are nearly 60 feet long per section. It takes 3 of them to make up the tower. Similarly, the rotor blades are enormous, over 100 feet in length. Can you imagine trying to get that to go around a corner?

Vestas Wind Systems of Denmark is currently building a turbine blade plant in Windsor, CO, just about 10 miles from where I live. This will better accommodate the delivery of large turbine blades to wind farm sites in the western U.S.

In talking with a rancher in Wyoming recently, it appears that a lot of site surveys have been underway over the years to construct wind farms there, turning what was very marginal land into a valuable resource to provide clean, renewable energy for future generations. Even though the Cedar Creek site seems expansive, and it is, there is so much land in eastern Colorado and Wyoming that would be ideal for wind farms that it’s easy to imagine building them for the next 20 or 30 years. That’s about the average life expectancy of the wind generating equipment, so after they’ve done that, they will get to do it over again.