I recently read a book entitled The Bottomless Well written by Peter Huber and Mark Wills. The book is about energy and written from a contrarian point of view. I enjoyed it because it was well written and contained lots of data related to energy usage and trends. It was obviously meant to be provocative because its premise is that energy is not scarce, the price of energy doesn’t matter very much, and ‘waste’ of energy is both necessary and desirable. With heresies like that, I figured it would be like watching a train wreck in progress. I could hardly put it down.

There are several factors at work today that make a book like this particularly timely. The first is that energy is at the center of a heated political debate. This is driven primarily by the fear that human activity is causing a change to the climate due to our use of fossil fuels. These fuels release carbon dioxide into the atmosphere from sources that had been buried for millions of years, and that has the potential to affect our global climate. Burning fossil fuels can change concentrations of atmospheric carbon dioxide, which is a greenhouse gas, and even a change of a few degrees on the climate could make the earth inhospitable for humans. The danger is that if there is something like an atmospheric ‘tipping point’ which we are approaching, we won’t know about it until it’s too late. There is evidence that the CO2 concentrations have been increasing ever since we began using hydrocarbons as fuel and that the concentrations are higher now than at any time in history.

Another part of this debate is that we are involved in a war to attempt to stabilize countries in a region that controls the world’s largest deposits of oil. Many people think that this war is unnecessary and should be abandoned, and we would be able to do so if we were not so dependent on the unimpeded flow of oil from that region.

The book starts out with 7 ‘heresies’ and then proceeds to support them with evidence. These heresies are:

The parts of the book I liked best were those showing analytical data, much of it in the form of graphs of quantities such as consumption rates, efficiencies, power densities, etc. Even if you don’t agree with any of the ‘heresies’ the authors espouse, you’d be hard pressed to find a more concentrated form of hard data related to energy.

The book doesn’t really take sides on the issue of global warming put mentions that anyone concerned with global warming should be more accepting of nuclear energy. I found that to be at odds with the way many environmentalists feel about nuclear energy. In my experience, I have found most, but not all, environmentalists are less enthused about nuclear energy than they are about increased consumption of fossil fuels. It would take a major crisis to get approval to build a new nuclear plant in the U.S. and the ones that do exist are beginning to reach the end of their design lives. The book indicated that the amount of uranium reserves exceed those of coal reserves. Coal reserves are currently estimated to be about 275 years in the U.S. at current consumption rates. But it doesn’t take much of an increase per year to reduce that number. For example, if we increase consumption at a rate of 3% per year, which is the average historical increase, the coal reserves fall to about 80 years. However, accounting for nuclear energy reserves is a complex issue which I’ll discuss in a future posting.

Energy can be a difficult subject to wrap one’s mind around. But the book does a great job by showing in fine detail how much energy humans consume. Humanity consumes about 400 Quads (quadrillion BTUs) of energy per year and it’s rising annually. This is a lot of energy, but is only about .02% of the amount of energy that arrives to the earth from the sun each year.

Although the U.S. comprises about 5% of the world’s population, we consume approximately one quarter of the world’s energy. A lot of people may find this alarming, even revolting, and something that must be corrected. But it’s important to note that as we strive to reduce our per capita energy consumption levels to better match that of other nations, the rest of the world is steadily increasing its per capita level of energy consumption as other countries modernize their own standards of living. So the overall result is that demand for energy is rising.

A concept that came up over and over again was the fact that most of the energy is wasted as it is converted and used for its intended purpose. One of the most eye-opening diagrams in the book is the ‘energy squid’ first published in 1937 and updated many times since then, a version of which is shown below. It shows the flow of energy in the U.S. from start to finish and you can indeed see that most of it ends up wasted. It gives you a sense of how much energy is used just to ‘purify’ energy itself. For example, conversion of coal to electricity loses most of its thermal energy to waste heat, somewhere about 60%, which cannot be easily recovered. It also takes energy to mine and transport the coal to where it will be used. We accept this energy loss because electricity is a much more valuable form of energy than coal. For example, you can reshape the cornea of an eye with a laser. That requires electricity. You can’t do it with coal alone. So we shouldn’t be focused solely on the efficiency of energy conversion. If we do, the result could be to outlaw useful technology like lasers because they are not very ‘efficient’ if you consider efficiency simply as a ratio of energy output divided by energy input. 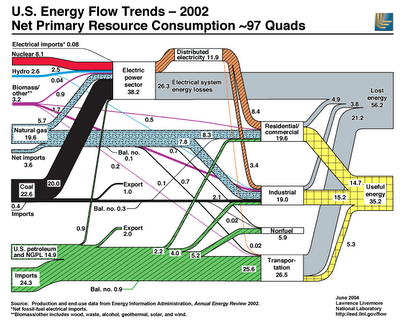 The ‘Energy Squid’ showing energy flow in the U.S.
Click on image to see larger version of it.

Automotive engines have similar energy losses. About 65% or more of gasoline’s energy is lost in waste heat. This is simply a limitation of internal combustion engines. Also, when you take into consideration that the end result is often transporting a single person, you can make an argument that the energy to move the entire vehicle’s gross weight is wasted because if you’re moving nearly 3000 lbs of vehicle to transport a 170 lb. person, you’re wasting over 90% of the energy. So ‘efficiency’ is not a very easy concept to describe, let alone mandate or regulate. You could also make the argument that a lot of transportation, such as leisure travel, is unnecessary and therefore inefficient and should be outlawed.

Another thing to consider is that when you make something more efficient, it lowers its cost and people end up using more of it because they can afford more of it. So chasing after efficiency often results in increased overall consumption.

I think it is important to listen to people whose viewpoints are well researched, yet sometimes contradictory to my own. That’s how I learn. If you only pay attention to people telling you what you already know, or think that you know, you cannot become any better informed. So even if you are a self-proclaimed tree hugger, it would
be a good idea to pick up this book and read it, so that you may better understand why everyone doesn’t believe the same things that you do. It may not change your point of view, but at least you’ll be able to evaluate the veracity of the logic behind the assertions the authors make in the book.

1 thought on “The Bottomless Well?”