Lately I’ve been trying work on my Zen habits and one of the tenets of this philosophy is to get rid of things that you are no longer using. An item in our lives that added cost and complexity and was no longer providing equivalent value was our hot tub. It came with the house and we used it for a while, but got out of the habit after a few years. It just continued to require energy, chemicals, and periodic repair that was out of proportion to the value we were getting from it. So we decided to give it away. I removed the decking surrounding it and with the help of a sawsall and eventually a chainsaw, I eventually liberated the deck structure that had been built around it. An ad for a functioning free hot tub on Craigslist resulted in 9 eager takers in less than 4 hours. Two people arrived for it around the same time and after a coin toss, the tub had a new owner. I wrote up a blog entry about it in July.

If you’re ever considering whether you should put a hot tub on top of your deck or build it into your deck, please choose on top of the deck. You’ll be much better off in the long run. Hot tubs require maintenance and building the tub into a deck makes maintenance much more difficult.

So for a few months, the gaping hole in the deck stared at me and I stared back at it wondering what would be the best way to fill it in. We joked about putting in a fish pond to entertain the cat and quickly realized that it would contain water and pumps and probably be a bigger maintenance headache than a hot tub. Thus it would definitely not be aligned with my desire to be more zen-like.

After removing the hot tub I soon realized that the deck had an oddity to it that wasn’t apparent prior to the tub’s removal. The main joists where the decking met were not aligned on the opposite sides of the hot tub. I wondered if this would present a problem if I were to have visible mismatch where the joists met in the middle or if it might look artsy. I drew it up in Autocad and realized that it would be very strange looking as you can see in the image below.

I decided I probably had to do some more surgery on the deck to get the main joists in alignment. After making another drawing, this time with the joists meeting at a center, I was much happier with the result. I removed the misaligned joists so that new ones could be installed that would align with the other joists. 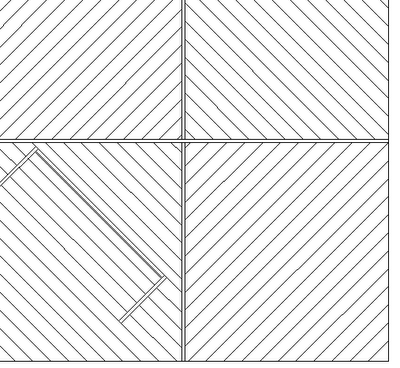 I had previously met a handyman through Craigslist when I needed some work done on my siding. He was very professional and let me provide a lot of input, buy the materials, and didn’t charge me any extra for my help. I decided to hire him again for the deck work because I knew with some professional help, the job would go very quickly once it got started. A colleague of Terri’s joked that I must have been in the corporate world too long because I was outsourcing my handyman jobs. Maybe, but I know good help when I see it and I’m more than happy to pay for it. 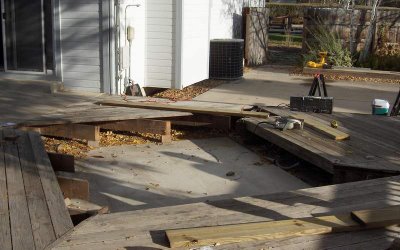 The hole in the deck left by removing the hot tub. 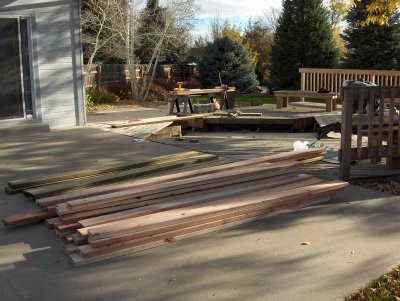 I was in charge of the design and the materials. Here we have the pressure treated 2 x 8 joists and the 2 x 6 redwood planks. 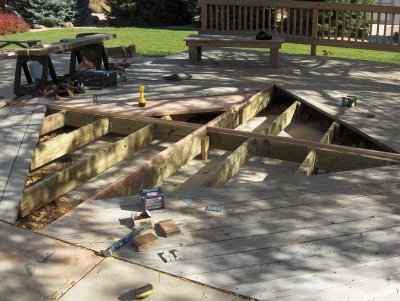 Here are the joists with the redwood decking just starting to be installed. The joists were supported every 2 feet on the concrete pad in case anyone ever wants to put another hot tub on top of the deck. I also left the access door for the electrical wiring in the deck. 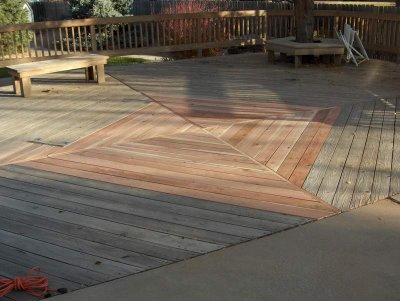 And here it is, all finished and looking like new. As the wood ages the colors will blend in. Right after a pressure washing, all the wood looks new like the new decking in the middle. That will be job for next spring.

We received a pleasant surprise in our electric bill today. It was 40% less than last year’s bill for November. The electricity cost to run a hot tub was one of those things that I never really wanted to contemplate when we owned it. Now that it’s gone, I’m only too happy to know what the savings will be. Based on some web research, a reasonable estimate for hot tub energy consumption appears to be between $400-$600/year and much of that is incurred in the winter when the difference between the outside temperature and the water in the tub is at a maximum. The cost of the chemicals and periodic repair added up too, easily adding a few hundred more per year to the overall cost. So the missing tub is already beginning to pay for the deck repair with negawatts and also by eliminating the cost of chemicals and maintenance.

1 thought on “Zen and the art of deck repair”