A few weeks ago I visited the National Renewable Energy Lab open house in Golden, CO with a few other members of the Northern Colorado Clean Energy Network. I’d wanted to see this facility for some time, and figured that an open house on a Saturday would allow some of our members who normally are unable to attend our energy tours during the week to join us. As it turned out, we only had 4 members of our group show up. Despite the low turnout, we had a good time carpooling there and back because we got to chat for a few hours about renewable energy topics.

The exhibits were very nicely constructed and a docent explained the various renewable energy programs underway and the purpose of the various buildings on the campus. There are numerous projects going on all over the facility, but unfortunately they are off-limits for visitors. Only the visitor’s center is accessible. I had expected this to be the case, and so I tried to gather some information about what would be necessary to get a tour of the actual laboratories in the hope that some future visit would allow us to get better access to what’s going on in the labs. I can see that it will be a challenge as they are not set up to handle tours of the actual labs.

The docent who was our guide had spent most of his career in the power field, and I had a long discussion with him about transmission of power over high voltage DC lines. Transmitting power over DC lines is counter-intuitive for most engineers who were taught that you can only transmit utility scale power on AC lines. But thanks to advances in high power semiconductor components to handle utility scale power, DC power transmission lines are becoming more common to deliver electrical power long distances and to help isolate grids through interties. This method of transmitting power will become more important in the future as some of the best potential sources of renewable power generation such as wind and solar tend to be far removed from population centers. HVDC power transmission has the advantage of being able to isolate the grids so that the need to control the phase of the AC power over long distances is not required. The largest DC line in the U.S. is the Pacific DC Intertie which takes hydroelectric power from the Columbia River in Washington State and delivers it to customers in the Los Angeles area.

My favorite Visitor’s Center exhibit was the section of the GE 37-meter wind turbine blade. I’ve seen these blades up close during our Ponnequin Wind Farm tour, but was curious about the materials of construction. With the section exposed, I saw that the materials looked identical to those used in my LongEZ and Cozy. They consisted of wood, foam, fiberglass, and epoxy albeit on a much larger scale that what is used in my planes. 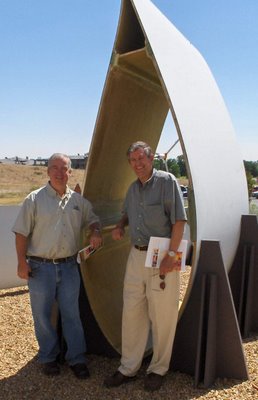 Me and Ed Miccio standing next to the GE blade section

You can see that the spar and caps are very thick on these blades.

The Cozy uses the same materials and construction techniques as the wind turbine blades.

The NREL visitor’s center is open from 9-5 Monday through Friday and I’d highly recommend that if you ever find yourself in the vicinity of I-70 at exit 263, you should stop by for a short visit and self-guided tour.