On Thursday, May 15th several members of the Northern Colorado Clean Energy Network toured the Denver Arapahoe Disposal Site to see a new landfill gas-to-energy project currently under construction and nearing completion. The site is constructed on a concrete pad that had previously been used for remediation of materials removed from the Lowry landfill, a superfund site, which is adjacent to the DADS landfill. For a period of around 13 years, beginning in 1967, the Lowry landfill received more than 100 million gallons of liquid chemical waste. I had incorrectly assumed that this Lowry superfund site was in some way associated military activity because it shares its name with the former Lowry Air Force base, but it was actually created by legal dumping at the city-owned landfill. The landfill’s name is likely a result of its proximity to the Lowry AFB Titan 1 Missile Complex 1A which is just to the west of it.

In addition to touring the facility, our tour guide also drove us up on to the top of the landfill where large earth movers were organizing the waste into ‘cells’ that were compacted and covered up with dirt. The dirt helps to keep the trash from blowing away and reduces its odor. The mountain that they are now constructing in this section of the landfill will eventually reach a height of 300 feet. If you want to see an aerial view of the site, here’s a link to Google Maps. You can see the Lowry landfill in the lower southwest section, a completed portion of the landfill that is 150′ tall in the northwest section, the new part under construction in the north east section, and a decommissioned Titan 1 nuclear missile site in the southeast section. If you zoom into active part of the site with the Google Maps view, please note the number of earth movers you can see on the site. That helps to give you a perspective on how big this site is.

The methane gas that will power the 4 16-cylinder 1100 HP Caterpillar engines is piped from various sections of the landfill. This gas is currently being flared (burned) and relased to the atmosphere in compliance with government regulations. Once the plant has been commissioned, the gas will be re-routed to the engines where it will be used to generate electricity. The current flow is 1200 cfm and that can produce 3.2MW of electricity which is enough to power about 3200 homes.

Landfills leak methane gas as the organic materials buried in them decompose and so if it’s not collected, it’s possible for it to accumulate and if it does that, it can become an explosion hazard. Even if the methane were not to accumulate, it would eventually find its way into the atmosphere and methane is about 25 times more potent as a greenhouse gas than CO2 so it’s better for the environment to collect and burn it and turn it into CO2.

The gas that comes out of a landfill is actually about half methane and half CO2 with small amounts of water along with minute amounts of other gases. The water needs to be removed from the gas to prevent it from corroding the engines and there is an apparatus that uses alternating heating and cooling of the gas to condense out the water. The water removed from the gas is sent to a water treatment facility. The diesel engines have been specially modified to run on a mixture of methane and CO2.

This apparatus removes the water from the landfill gas

One part of the facility that I found particularly interesting were the controls that took the electricity and converted it for use on the grid. They used Woodward controllers and large cabinets with impressively large bus bars and capacitors. It was one of the parts of the facility where no pictures were allowed.

The 4 engines are currently 16 cylinder models but the facility is sized so it can be re-fitted with 20 cylinder engines that would produce twice as much power should the gas flow continue to increase. Because of Denver’s arid climate, the gas flow from these sizable landfills is just a fraction of what it would be in a moist climate. This is a disadvantage in some ways, but a benefit in other ways. It takes a much larger landfill in an arid climate to make economic sense for electricity generation, but it should also produce methane for a longer period of time, because it will take longer for the organic material inside the landfill to decompose. At the current rate of gas production, the existing wells should produce for another 20 years. There is enough land available for many decades before this landfill would be considered ‘full’ and the newer mountains will be much larger than the existing ones and so this landfill may be producing electricity for many decades. 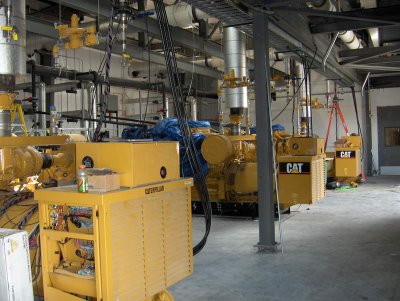 Several of the 1100 HP Caterpillar engine/generators

This landfill is owned by the city of Denver and receives about 1200 truckloads of solid waste per day. It operates 6 days a week, 24 hours a day. In addition to burying trash, there is a concrete recycling operation on site where old concrete is ground up and used over again, saving cost on materials and energy over making concrete from scratch. There are several other recycling operations on the site.

I came away from this trip impressed with the engineering that has gone into designing and maintaining a modern landfill. We have come a very long way from just a few short decades ago when we though it was environmentally responsible to handle liquid chemical waste by simply dumping it in an out-of-the-way place, not realizing that a city would eventually grow out to meet it. To be fair, at that time the links between the long term health effects of exposure to toxic substances were not well known and so many waste handling policies of that era were formed out of ignorance. This site is continually monitored to make sure that nothing hazardous makes its way into the water table or atmosphere.

We’d like to thank Brad Gagne and Steve Derus for making this trip possible and for answering the numerous questions we had about the facility. Everyone felt like they got a lot of out seeing an operation like this up close. 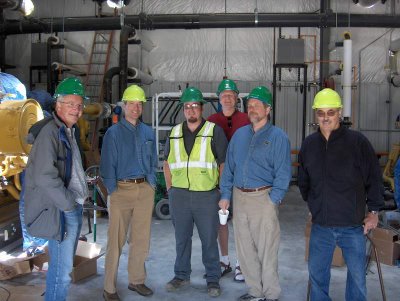 Some members of NoCoClean and our host, Brad Gagne, in the engine room.