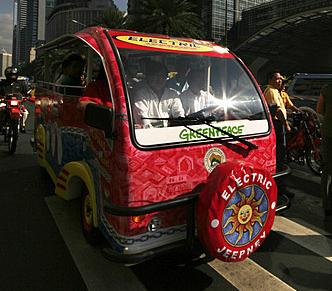 I recently watched a series on the Discovery Science channel entitled Ecopolis. The premise behind each of the 6-part series was to showcase 4 promising technologies intended to solve the environmental problems of a hypothetical megacity of the future named, appropriately enough, Ecopolis. There were 5 episodes that each focused on a different issue, such as food production, transportation, energy, and waste disposal. In each episode, Dan Kammen, a Nobel prize winning scientist, would select the technology he thought held the most promise to solve the most critical issues that large cities face today and in the future. The 6th episode was a recap of the previous episodes and of the individual episode winners. Kammen also chose his overall favorite in the last episode.

The winner from the transportation episode was the eJeepney. The Jeepney, which is a portnamteau of Jeep and Jitney is used in the Philippines as a form of taxi-bus that carries about 16 passengers. It is a sort of cross between an Army Jeep and a Jitney. The original Jeepneys were built up from surplus Army Jeeps that the U.S. military had left in the Philippines after WWII. Subsequent models have been built on various Japanese vehicle frames usually in back lot operations, but the name ‘Jeepney’ remains. It’s an iconic vehicle of Philippine cities.

The eJeepney is an electric version of the Jeepney that was designed and built by Robert Puckett with the support of Greenpeace. These vehicles were designed from the ground up to be optimized for an electric motor drive. I was surprised to find that it used only a 5 HP (3.7 KW) motor and yet was able to carry as many as 17 passengers. Its top speed is 40 kph (26 mph). An 8-hour charge costs around 120 Philippine Pesos (PHP) and allows it to travel up to 120 km (75 miles). A PHP is worth about $US .0211, or just over 2 cents so 120 PHP comes out to around $2.50. An equivalent fill of diesel fuel, which is what most conventional Jeepneys require to travel a similar distance would cost about $6.50. The cost of riding a Jeepney is set at 8 PHP for the first 4 km (2.6 mi). This is about 17 cents. The e-Jeepney prototypes were built in China at a cost of around $8000 each.

The advantage of electric vehicles in congested cities can be significant. When an electric vehicle isn’t moving, it’s not using energy and even when it is moving, it is not polluting the air like the diesel powered Jeepneys. Considering there are 450,000 registered Jeepneys in the Philippines, the pollution caused by their diesel engines is a major health hazard.

I did some research and found that the price of electricity in the Philippines is about the same as the U.S. or $.010/kWh. So I can deduce that it takes about 25 kWh to charge an eJeepney. This is about the daily electricity use of an average U.S. household. Taking into consideration the inefficiencies of charging, I would estimate the batteries to be rated around 20 kWh. They are most likely to be lead acid which would weigh around 500 kg (1100 lbs) and cost in the neighborhood of $2000. The eJeepney has body panels made from fiberglass to save weight. One blogger mentioned that the eJeepney weighs 900 lbs. and I’m quite sure that is without the batteries. In looking at the heavy metal construction and ornaments on the traditional Jeepneys, weight savings were never an important consideration for these vehicles. Assuming that the passengers weigh about 150 lbs each, that mean the gross weight is about 4500 lbs, or about the empty weight of my Dodge Durango.

Accelerating a load of 4500 lbs with a 5 HP engine is likely to quite slow, and I’m not sure how it would get up a hill at gross weight, so my guess is that the routes would of necessity need to be quite level for these vehicles to make sense.

Another proposal related to these vehicles was to generate the electricity for them with organic waste converted to methane by anaerobic digesters, similar what’s happening in some landfills in the U.S. With the combination of the electric drive and electricity from a renewable fuel source, the benefits of the eJeepney gave it the nod for the overall winner of the Ecopolis series as well.

Sometimes people think that public transportation is the solution that all that ails modern society. There certainly are instances where taking public transit is more convenient than having to drive yourself. But I have to admit, like many Americans, I have a love affair with my personal vehicles. Public transportation is a hard sell once you’ve tasted the freedom and exhilaration of being in command of your own vehicle. Now, I’ll be the first to admit that a personal vehicle in a congested city is a major pain and I’m grateful for public transportation whenever I visit a bustling city, but when you’re located anywhere else on the planet, it’s hard to get along without one’s own personal ride. So while I can appreciate the eJeepney’s value in a huge metropolis, we don’t all live in cities, so I’d also like to see some more effort expended on making personal transport more environmentally friendly.

If you can get me one of these at a reasonable price, I’ll be very interested.