Back in 1987, on a cold January day, I found a Harley-Davidson ElectraGlide Classic advertised in the local newspaper.I had known from a relatively young age that the one thing separating me from true and everlasting happiness was owning a Harley-Davidson motorcycle. And so, with that in mind, I embarked on the pursuit of making that bike mine. It had been repossessed and was owned by the local bank, and they only wanted to get the bad loan off their books, so they did little to properly advertise the bike. It was in a shop in an out-of-the way place and so I went over to take a look at it. It was in very good condition, only 3 years old and had the highly desirable 80 cu. inch Evolution V-twin engine which was new for the 1984 model year. It also had an accessory that was not on my ‘must have’ list, namely, a sidecar. I always felt a sidecar looked somewhat odd on a motorcycle, but I reasoned that if I could get the bike for a price that made the sidecar look virtually ‘free’, it would be a good deal because I could always sell the sidecar separately. New sidecars added about $3500 to the cost of a Harley at the time. So I put in a bid slightly below the motorcycle’s book value and in a relatively short time, the bike was in my garage.

The first thing I noticed about riding a bike with a sidecar was that it felt very strange going around corners. Previously, cornering was an exhilarating experience on a motorcycle, but with the sidecar, it became a chore because I felt like I was being thrown off the bike. When turning right, going a little too fast could actually bring the sidecar’s wheel off the ground. I decided that the sidecar, as novel as it looked, took much of the joy out of riding and I promptly removed it. For the next 8 years, the sidecar sat idle while I rode the bike without it. Finally, I sold the sidecar to someone who wanted it, content that I’d never use it again.

I eventually sold the Harley too, after 16 years of owning it, for approximately what I paid for it, around $7500. For those of you who think I’m a shrewd investor, if I used the $7500 and purchased Harley stock instead of that bike, the stock’s value over the same period would have been worth nearly $400,000, so the bike wasn’t really a great investment compared with owning a part of the Harley Davidson company. But “50-bagger” stocks are few and far between and Harley stock has now been flat for about the past 7 years. However, the same amount of money invested in the S&P index would have yielded about $40,000 over the same 16-year period, so again, the Harley would hardly qualify as an ‘investment’.

Here are the lessons I learned from it:

1. There is no one material thing that separates you from true happiness.

2. When you think there is, take the money and buy a stock market index fund instead.

3. Continue searching for the one and only thing that separates you from true happiness.

The reason I mention this experience is because I’ve been contemplating alternative modes of transportation and trying to imagine what a fuel-efficient futuristic vehicle might look like. I spend about 7 months of the year riding my BMW1150RT motorcycle, which was my mid-life crisis replacement for the Harley. I do really enjoy riding it. But for the other 5 months, I need something that can deal with cold weather and snow typical of Colorado winters. Many, if not most, of my cold weather trips are made solo, which means I could use a two-place vehicle like a motorcycle since I don’t need all the room afforded by an SUV. Ideally, it would have very little frontal area and would need to be fully enclosed. Most critically, it would need to be able to lean into turns. Oh, and I must look cool while riding/driving it. I almost forgot to mention that, but it’s probably more important than any other consideration for most people.

I thought I saw the future of transportation at Epcot nearly 20 years ago when I saw the ‘Lean Machine’ , a fully-enclosed 3-wheel vehicle that looked very much like what I just described and capable of leaning into corners. But the machine was designed by GM and they apparently opted not to pursue it, probably because the public was more interested in buying SUVs, trucks, and Hummers than single-seat quirky vehicles with excellent fuel economy.

Now that gas is heading toward $4/gallon with no end in sight, fuel economy is starting to appear on everyone’s radar screen again as a desirable attribute in a vehicle.

An electric motor scooter was profiled in the ‘First Ride’ section of the latest issue of Motorcyclist magazine and it got me to thinking about whether it may be just the right time for an electric motorcycle or possibly a futuristic 3-wheel leaning vehicle to come to the market. The electric motor scooter profiled is called the Vectrix Maxi-Scooter and it has an electric 20 KW (26.8 HP) motor, along with a 200lb., 3.7 kWh battery. Simple math will tell you that this battery would hold about 11 minutes of juice if you were able to run the vehicle at full power, although that probably wouldn’t be possible to do unless you were climbing up a hill at full speed. The company states that the scooter will get between 20 to 60 miles per charge depending on how it’s driven. A charge takes 2 hours to get to 80% battery capacity. The author in the Motorcyclist article got 40 miles from a charge. So it would stand to reason that average riding consumes about 95 Wh per mile. To put that in perspective, it’s the same as using 1 oz. of gasoline per mile assuming a 30% thermal conversion efficiency in an internal combustion engine. You don’t need a calculator to realize this is the equivalent of 128 mpg. The entire battery holds about the same amount of energy as 1/3 of a gallon of gasoline, again assuming a 30% thermal conversion efficiency. Since 1/3 of a gallon of gasoline weighs about 2 lbs., the energy density ratio of the NiMH battery to gasoline is 1:100. Herein lies the biggest problem with electric vehicle energy storage and that is energy density or lack thereof. The 200 lb battery accounts for 43% of the scooter’s 462 lb weight. That’s a nearly identical battery-to-vehicle weight ratio of the GM EV1 that I wrote about previously. With an MSRP of nearly $12K, this scooter costs about twice what an equivalent gas powered scooter would cost.

I have a confession to make. I like riding scooters. I didn’t think I would, but Terri and I rented one our honeymoon and we explored most of Grand Cayman on it. I know that I don’t look cool on a motor scooter — no guy does — but I had already landed the girl, and she didn’t seem to mind, so I figured, “What the heck? I might as well enjoy it.” We rented a scooter in Tuscany and loved it too, especially on the back country roads between Florence and Sienna. We did find ourselves forc
ed to use the autostrada while on a jaunt over to Pisa and the 125cc engine strained to keep up with the flow of traffic. So when no one is watching, I’ll ride a scooter, preferably with a full-faced helmet and dark face shield, so no one will recognize me.

But I’ve tasted what it’s like to ride Ducati and when you pull up at a stop light on a bike like that, everyone just stares, mouths agape, and it’s then that you know you’ve truly arrived. Women want you, men want to be you. You can’t overestimate the psychic value of looking cool on your ride.

So how can we solve the fuel economy/cool factor/all-weather transportation needs of the future? Well, the primary issue is the coolness factor. It has to look cool, not geeky, and be quick too, because the coolness factor will wear off quickly if you’re getting passed by bicycles. Secondly, It must lean into corners, because if it doesn’t, it will either need to be wide or unstable. Third, it must be enclosed for cold weather. That means it needs either three wheels or outrigger wheels that deploy when stopping to keep you from tipping over. I’ve seen a few examples of the latter, but for some odd reason they all cost upward of $100K. It could be an all-electric vehicle, but not if it requires gobs of weight in batteries. So I think that means that it may need to be a hybrid.

I’ve seen a few promising examples of what I’ve described and I’ll show some pictures and links here: 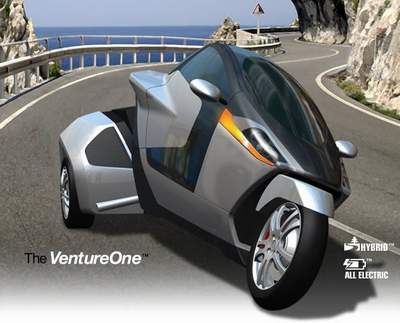 Venture is an American licensee of the leaning technology developed by the Dutch company Carver. Make sure to visit their website and watch the videos, most of which are of the Carver. 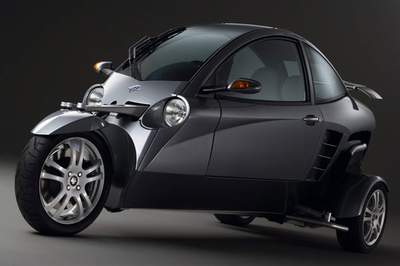 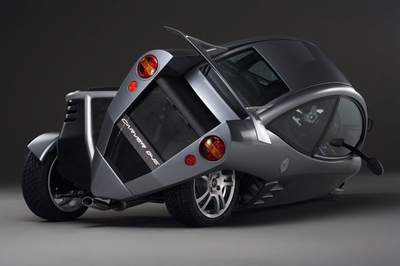 And the Carver can really lean over dramatically 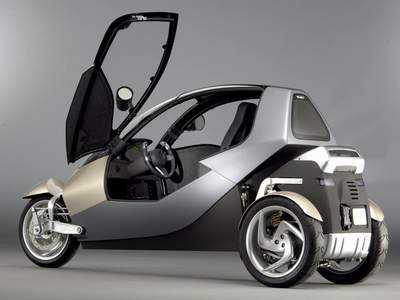 BMW even seems to have at least a concept version of a 3-wheel vehicle called the ‘Clever’.

The vehicle of my dreams may be available today, but it’s priced beyond what I’m willing to pay. For now I guess I’ll have to be content to ride a 45-mpg BMW sport touring bike in warm weather and suffer sticker shock each time I fill up at the pump with my 14-mpg Dodge Durango in the winter months. I do love the Durango because it will comfortably haul 7 people around in the nastiest weather Colorado can dish out and it can even swallow whole sheets of 4’x 8’ plywood. It’s hard to put a price on that. But the weather’s warming up now and I’m itching to lean into some curvy canyon roads so it feels like it’s time to pull out the BMW.

And, if at some point if you see some dude cruising by on a geeky electric scooter with a full-faced helmet and dark face shield, it just may be me. 🙂

UPDATE: 2009-01-15 After re-reading my advice to ‘buy a stock market index fund instead’ I have to confess with perfect 20/20 hindsight that no longer looks like very sound advice 🙁