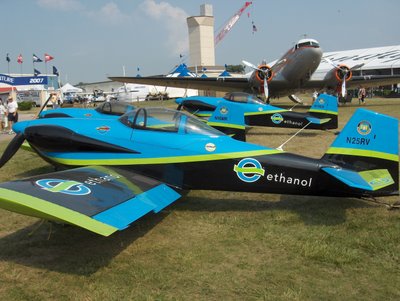 A few months ago I bought an engine for the Cozy that is a 200 HP version of the Lycoming IO-360. This engine produces about 20 HP more the standard 180 HP O-360 engine. In order to get to 200 HP, it has higher compression ratio and that requires the use of 100 octane fuel. Today, 100 octane fuel is available at most U.S. airports, but I worried about its continued availability in the future. Aviation fuel, or 100LL as it’s called, uses tetraethyl lead to increase the octane rating of fuel. Adding lead to auto fuel to enhance its octane used to be quite common but fell out of favor when it was found to distribute the lead, now recognized as a poison, into the atmosphere. Just about all countries in the world have discontinued the use of lead as an octane enhancer for auto fuel.

I began to wonder what I might use for fuel in the future should leaded aviation fuel be outlawed, and my attention turned toward alcohol, ethyl alcohol, to be specific. It’s also called ethanol or grain alcohol and is used as an octane enhancer. It also makes gasoline burn more cleanly. Ethanol is the form of alcohol that you find in alcoholic drinks. Because of this, it is subject to liquor taxes. The only way to avoid paying liquor taxes is to add poison to it. If fuel was drinkable and available for a few dollars per gallon, it’s assumed that no one would bother buying beer, wine, or spirits. With that logic, it’s hard to understand why anyone would buy an 18-year-old bottle of scotch for $75 when Everclear can be had for $10. 🙂 This poisoning is called ‘denaturing’ and as long as it makes the alcohol undrinkable, just about anything can be used.

It’s not unusual for auto fuel in the U.S. to contain 10% alcohol since most cars can run on fuel with this concentration of alcohol. It’s beginning to become available at 85% concentrations, called E85, but that requires that the fuel system is compatible with that level of alcohol concentration. Only a small number of vehicles manufactured over the past 10 years or so claim compatibilty with E85 and you can look up whether yours is compatible by searching for “E85 compatibility” on the Internet. Each year, more vehicles are introduced that will run on E85 or regular gasoline and these are referred to as ‘flexible-fuel’ vehicles. There’s even an effort underway to make an aviation grade ethanol called AGE-85 that is not without controversy.

Back in the 1980s and 1990s when aviation fuel cost about twice as much per gallon as auto fuel, several efforts to qualify auto fuel in aircraft were conducted. They were targeted at older aircraft with low compression engines which were able to run on an aviation fuel called 80LL whose octane rating was close to regular unleaded auto gas. Quite a few aircraft were eligible to burn auto fuel, provided they purchased a placard called an ‘STC’ for about $200. Some airports actually began carrying it as a less expensive alternative to 100LL after 80LL went out of production. However, the tests to get approval for the STC were conducted before alcohol became a common additive to auto fuel. After it became commonplace to use alcohol as an additive, it was found that some aircraft had problems with it attacking the rubber seal materials in the fuel system. The entities that granted the STC, namely Peterson Aviation and the EAA, do not allow the use of auto fuel that contains alcohol. The octane enhancer of choice back in the 1980’s was MTBE, methyl teriary butyl ether, and it had no issues with fuel system compatibility. But it has subsequently fallen out of favor because it has environmental and health concerns. It has largely been replaced by ethanol. Adding ethanol has now become so common with auto fuel, and the difference in price between auto fuel and avgas is not as significant as it was in the 1980s so the popularity of using auto fuel in aircraft is beginning to wane.

The IO-360 engine I mentioned earlier would not be a candidate for an auto fuel STC anyway because the octane rating of auto fuel available in the U.S. runs about 85-91 octane which is much too low and would damage an aircraft engine designed to run on 100 octane fuel. To get a fuel that had an octane rating around 100 would require using some additive. Otherwise, engine knock, also known as auto-ignition, would create multiple flame fronts that collide in the engine’s cylinders, increasing pressures and temperatures that over stress and damage the engine.

It would appear that a solution to my concern would be to make the plane compatible with ethanol because it has an octane rating of 105. I recall seeing a group of experimental aircraft showing up at Oshkosh for many years now that all run on ethanol. They are known as the Vanguard Squadron and are shown in the image above. I tracked down one of their members, Dick Pearson, and he generously allowed me to pick his brain regarding his experience of using ethanol in an airplane. Dick has nearly 14 years of experience of using ethanol in 2 separate experimental aircraft that he flies as well as that of the other 4 aircraft in the Vanguard Squadron. He is quite a proponent of the fuel. He told me that there is a lot of controversy and misinformation floating around regarding ethanol. For example, there is a persistent belief that the energy that it takes to grow corn and convert it into ethanol exceeds the energy content of the resulting ethanol, giving it a negative energy balance. This is not true. The reason that this misconception persists is because natural gas is often used in the conversion process to provide heat for making alcohol from corn. But there’s a good reason for using natural gas for heat. The value of natural gas per BTU is much lower than it is for ethanol per BTU. It’s about a third the cost per BTU as ethanol. So even though one could use a portion of the ethanol to provide heat in the process that makes it, it’s not as economical as using natural gas for heat. It’s this business of using a fuel other than ethanol to help make ethanol that leads people to believe that it has a negative energy balance. It actually has a positive energy balance widely accepted to be around 1.34, or getting a third more energy out of the process than is put into it. That takes into consideration the energy required to fertilize, plant, irrigate, spray, harvest, transport, and convert the corn into alcohol.

Energy balance is only part of the equation, since when you talk about energy you must consider more factors that the energy balance or cost/BTU. It’s also important to consider factors such as energy density, convenience, and fuel compatibility. This is particularly true when it comes to transportation fuels since there is high value to having a fuel that is compatible the existing engines. If energy balance and cost/BTU were the only measures of concern, we might see coal-fueled vehicles since its cost per BTU is about 10% of what we pay for gasoline.

In Brazil where they make alcohol from sugar cane, they are able to burn the waste parts of the sugar cane called bagasse to generate the heat needed for the process. As a result, they get 10 times more energy from the sugar cane than is required to grow and convert the sugar cane to ethanol. This is similar to the energy balance expected with cellulosic alcohol.

A number of companies are working on deriving ethanol from cellulosic plants instead of corn kernels. These materials include waste products such as wood chips, corn and wheat stalks, and other organic waste materials that have limited use today. In most cases, you have to pay someone to dispose of them. The processes that convert cellulose to alcohol are currently not mature enough to be cost competitive with making ethanol from higher-value materials like corn. However, there are a number of companies working to improve the processes and if they become competitive, it could reduce the cost of ethanol to be lower than gasoline in a direct fuel mileage comparison, and when that occurs, it has the potential to change everything.

Some cellulose-to-alcohol processes are based on enzymes that can unlock the sugars in cellulose and convert it into alcohol using conventional fermentation. There is an ethanol plant in Canada already doing this as well as a few more under construction. There is a also a non-fermentation process developed by Range Fuels of Broomfield, Colorado that can convert cellulosic materials to alcohol. Range Fuels is building a cellulose-to-ethanol plant in Georgia that will be capable of producing 100 million gallons of ethanol a year from wood chips. I think this will substantially change the perception that ethanol is nothing but a farm subsidy, which is the view a lot of people have about it today. Can you imagine a lawn service where they reduce the fee if you let them take away the lawn clippings, leaves, and other yard waste? I think that would be a huge step in the direction of energy independence because recovering energy from local waste materials would reduce an energy supply chain that currently extends around the globe to a short loop within your own neighborhood. It would also reduce CO2 emissions because plants generally release their carbon back into the atmosphere in a relatively short time, and so instead of digging up carbon that has been buried for millions of years, we’d be able to use carbon that was essentially on its way back into the atmosphere anyway. [UPDATE 2014-02-26] Range Fuels burned through $234M in capital, about a third of it from taxpayers, before shutting down operations in 2011.

There are a lot of competing and complementary renewable energy technologies under development including wind, solar, and biomass. I don’t think that there will be a single winner in the race to replace our convenient yet exhaustible fossil fuels. I feel a lot more optimistic about it after doing my own investigation of alternatives like ethanol instead of listening to pundits arguing for or against it, because it doesn’t take long for people to get emotional about their point of view when it comes to renewable energy. I guess that’s because mixing politics with science can be such a volatile combination. Now if only that volatility could be converted into usable energy our future would be secure!

23 thoughts on “Can ethanol be an aviation fuel?”