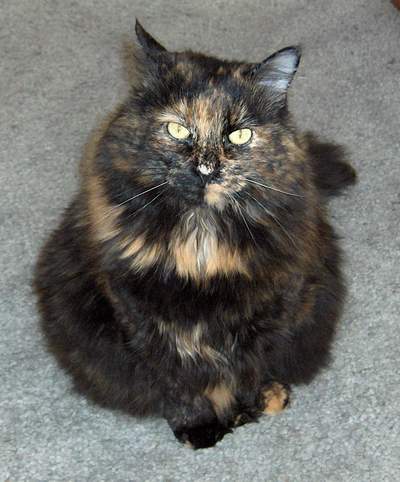 A few months ago I posted about our cat Bailey, who had passed away after 14 years. It was pretty sad around here since Terri and I had grown so attached to him. Our household seemed to revolve around him. Shortly after that, our veterinarian told us about a local cat whose owner could no longer take care of her and encouraged us to take a look and see if we wanted to adopt her. After a string of 3 male orange tabbies, I guess we were ready for a change. Now that we’ve had a chance to get to know her, she’s becoming like a new family member. Technically, she’s a tortoise-shell cat, but her previous owner called her ‘Calico’, which isn’t really correct, since a Calico cat has some white spots along with the dark and orange, whereas a tortoise shell is all dark. But it would be cruel to change her name after she’s had it for 9 years for a simple technicality. We just call her Cali and it fits her.

When we first brought her home, she hid in the basement under the basement steps and seemed somewhat afraid of us. I suppose that being taken from her familiar environment scared her a bit. We began to wonder if we were going to have one of those cats you only know of because of the missing cat food. But now she’s gotten to know us and goes wherever she wants and no longer hides in the basement. She follows us around everywhere we go.

An essential duty for any cat in this household is to be a good mouser. Terri doesn’t like mice and will scream at the top of her lungs if she sees one, especially if it’s alive. So it was quite gratifying to know that this new cat will catch, kill, and eat the little monsters. We let her in the garage where some mice have taken up residence thanks in part to an ample supply of birdseed that they like as much as the birds do. The birdseed is there to feed the birds that visit the feeder outside our window. The birdfeeder is really there to entertain the cat. So there’s a certain symmetry to this whole food chain that all stems from a desire to entertain cats and make sure they don’t get bored.

Matt Mullenweg, the founder of WordPress, once remarked on a Podcast that his blog used to be really lame where he’d write about his cat or what he had for dinner, so it’s not that I don’t know writing about one’s cat is lame, it’s just that with a blog you can do whatever you want and, if I want to write about my cat, I’m going to do it. With a blog, one day you’re a tech industry pundit, the next you’re baring your soul, or at least disclosing personal information about your pets. And that’s what makes a blog personal.