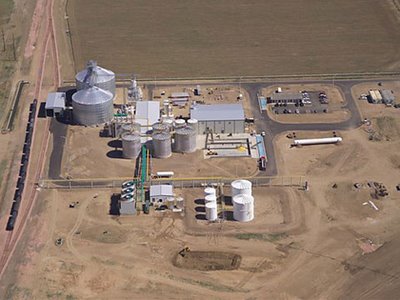 Last week I toured the Front Range Energy ethanol plant in Windsor along with 9 other members of the Northern Colorado Clean Energy Network many of whom are also members of the Northern Colorado Renewable Energy Society. I had requested the tour because I had a desire to see this facility up close to find out what is involved in an operation capable of producing 40 million gallons of ethanol per year. The company manager, Dan R. Sanders, and FRE employees very graciously set up a tour for our group and explained the details of ethanol production at the facility.

Ethanol has been an additive in auto fuels in the U.S. for many years. In addition to making the gasoline burn cleaner, ethanol increases the fuel’s octane rating and helps reduce our dependence on imported gasoline by more than 5 billion gallons per year. While this is still a small percentage of the U.S. consumption rate of 140 billion gallons of gasoline each year, its recent growth rate is impressive as is the rate of ethanol plant expansion and construction. I’ve written about E85 ethanol previously, including using it in vehicles that were not designed for it as well as in aircraft.

I am aware that ethanol is still controversial in some circles primarily due to some persistent myths such as it taking more energy to produce a gallon of ethanol than it returns, which is not true. Ethanol production in this country provides 40% more energy than it requires to produce it and that number continues to improve, but more importantly, ethanol’s energy has 3 times the value to consumers than the type of energy it uses, which is usually natural gas. When it comes to energy, some types of energy are worth much more than others because of convenience or compatibility with existing infrastructure. It’s the reason you probably don’t heat your house with coal, even though it’s the cheapest fuel per BTU by a significant margin.

The Front Range Energy plant was built in 2005 and began producing ethanol in 2006. Our tour included a 35 minute presentation to describe the operation in detail by Amanda Huber, the process manager, who walked us through each step in the highly automated process of converting corn into ethanol. She also answered many questions from our members. We were then taken through the facility by the company manager to see and hear all the equipment up close. The words that come to mind to describe the plant’s equipment are large, loud, and highly automated. There are many large cylindrical tanks connected with numerous pipes and pumps. The smell of the plant reminded me of the smell of our kitchen when we make pizza dough.

The corn arrives to the plant by both truck and rail and is stored in two impressively large 500,000 bushel storage silos. The corn from local growers arrives by truck and the corn from outside the region, primarily Nebraska, arrives by train. From the storage silos, the corn moves by conveyor to the hammer mills where flailing hammers pound the dried kernels through screens containing holes that will only allow particles smaller than about 1/10 of an inch to pass. This helps to expose the starch inside the kernel, which accounts for about 65% of the corn by weight. From the hammer mills, the corn passes to the slurry blender which mixes it with water and enzymes and cooks for several hours. It is inside this slurry cooker that enzymes begin to break the corn starches down into fermentable sugars.

From the slurry cooker, the mixture passes through some liquefaction stages and then on to one of four 535,000-gallon fermentation tanks. Additional enzymes and yeast are added to the mash, as it’s called at this stage, and it is allowed to ferment for about 50 hours. This stage is critical to monitor because it’s where the sugars are converted to alcohol and if this process is not properly controlled, it could ruin the entire batch. They use a combination of analytical instrumentation to monitor the health of the yeast as well as the concentrations of sugar, alcohol, and acids in this tank. After the fermentation step is complete, the mixture will contain somewhere between 15-18% alcohol. Another output of the fermenters is carbon dioxide which could be vented to the atmosphere, but in this plant it is fed directly to another plant that condenses it and provides it to bottling plants for carbonating drinks and for making other CO2 products such as dry ice.

The mix is moved from the fermenters to a 735,000 gallon beer well which feeds the distillers. Using a combination of heat and vacuum, the alcohol is separated from the rest of the mix using a beer column to produce alcohol in a 70% concentration and then it is transferred to a rectifier column to get the concentration to 95%. Alcohol and water form an azeotrope at this concentration, meaning that distillation can no longer further separate the water and alcohol. So the next stage is to run the mixture through a molecular sieve to remove the remaining water and produce anhydrous ethanol. The ethanol is then denatured to make it unfit for human consumption by mixing it with about 5% gasoline. It is then pumped into one of two 500,000 gallon tanks where it awaits transportation by truck or rail car to its destination.

From the bottoms of the distillation towers, the solids and water are pumped to a centrifuge which separates the water from the solids. The solids then become wet distiller’s grain which is used as an animal feed. In some plants, this grain needs to be dried so that it will not spoil during transportation and storage, but in northern Colorado, because of its proximity to numerous cattle feedlots and dairies, it can be shipped in its moist state directly to the dairies and feedlots. Trucks remove approximately 1100 tons of this material a day from the plant. If the distiller’s grain had to be dried, it would more than double the amount of natural gas consumed by the plant, so there is definitely a benefit to having large meat packing and dairy industries nearby.

I have simplified my description of this process considerably. There are many auxiliary steps to achieve a high level of efficiency for the plant. For example, there are steps for adding nitrogen to the fermenters, recycling the water, regenerating the molecular sieve, extracting and remixing syrup with the grain, and recovering alcohol which I did not mention. This plant has a lot of very sophisticated and finely-controlled processes. If you’d like to see a little more detail, there is an explanation complete with a diagram at the ICM website, the company that designed and built the FRE plant.

As an engineer, one area I found particularly fascinating was the control room which had a series of computer screens that showed a pictorial view of the real-time status of every level, temperature, flow, and pressure of the entire process from beginning to end, all being monitored by one person. The plant is so automated that it can be run by as few as 3 people. The plant only requires 32 full time employees to run a 24-hour a day, 365-day per year schedule. The plant is able to process 55,000 bushels of corn into 145,000 gallons of ethanol every day of the week and have minimal plant downtime, typically less than 7 days over the course of a year. The plant achieves a yield of 2.7 gallons of ethanol per bushel of corn.

Another thing that impressed me was how aware the company manager was of power consumption in the plant. At this plant, a gallon of ethanol requires 15,000 BTU in natural gas and .5 kWh of electric energy. Since ethanol contains 76,300 BTU per gallon of thermal energy, and .5kWh is equal about 1600 BTUs, the excess energy is about 60,000 BTU per gallon.

There is a controversial study by Pimentel and Patzek that is referenced frequently by skeptics about how ethanol has a negative energy balance of 20% meaning that it takes 20% more energy to produce ethanol that it delivers as fuel. However, two separate USDA studies contradict that study, the most recent one showing a 40% net positive energy balance. Yet the numbers the USDA uses, often called ‘optimistic’ by critics, are not as high as the actual numbers from this operating plant. For example, the USDA cites portion of energy attributed to the ethanol plant as 49,700 BTU/gallon. Yet here is an actual plant using only 16,600 BTU in combined natural gas and electricity per gallon. Even if they had to dry the distiller’s grain, they’d still be under 34,000 BTU/gallon. So I don’t think that the USDA study is overly optimistic. It seems to me to be very conservative.

And, like I mentioned before, energy balance is only part of the equation. The cost per BTU of various forms of energy vary significantly so if you take one type of energy that is worth $7/MBTU, such as natural gas, and covert it into energy that is worth $23/MBTU, such as automotive fuel, then energy balance is overshadowed by the net increase in economic value of the energy.

I got a lot of positive feedback from the rest of the members about the plant tour. It was a great to have a chance to see firsthand how ethanol is made. We really appreciated the professionalism and hospitality shown to us by the knowledgeable staff at the Front Range Energy plant.