I got a MacBook Pro about a year ago and, coming from a background of using Windows, I installed Boot Camp on it so that I could run Windows programs. I find that I actually use Windows most of the time on my Mac computer. However, after a year, the 30 GB Boot Camp partition was reaching its limit. I found that in order to install some new program, I had to uninstall something else. I did a web search on how to expand the Boot Camp partition and was greeted with lots of advice from various forums, much of it conflicting, some of it untested, on whether it was possible and which tools to use. At first I was hoping to just find a utility that allowed me to move a slider bar that would shrink the Mac partition and expand the Boot Camp partition. However, after reading numerous postings and websites on how to perform the task, I realized that wasn’t going to happen. I saw a few recommendations for Camp Tune, which supposedly allows an easy way to resize the Boot Camp partition without deleting it but that program is no longer free and some have reported that it didn’t work all the time.

I dutifully backed up the Boot Camp partition several different ways and then committed to changing it from FAT32 to NTFS. I had set it up as a FAT32 partition initially because that would allow me to write to it with the MacOS. The MacOS can read from but not write to NTFS partitions. However, I found that I never used that feature and the free tool I was going to use (WinClone) didn’t allow you to expand a FAT32 partition. It could back it up and restore it, but it would stay the same size. So I had to convert my Bootcamp partition to NTFS. That’s actually easy to do, but it takes some time. You just need to boot Windows and then go into the DOS prompt and use this command:

You may have to reboot to get this to work because it may be unable to unmount the partition to convert it. In my case it required two reboots, both of which ran the chkdsk program before the partition converted to NTFS.

Once this was done, I used WinClone to back up the Boot Camp NTFS partition to an external USB drive. According to one of the comments, WinClone may not work with MacOS 10.6 (Snow Leopard). I’m running Leopard (10.5). After backing up the Windows data, I used the BootCamp Assistant in the Utilities to delete the Bootcamp partition, and then to resize it to 120GB. After that I used WinClone to restore the image to the Bootcamp partition.

That video gives you the impression that the steps all take a few seconds. However, some of them can take hours so you need to be patient.

Beware that some people have reported losing data while attempting to perform these steps, so it’s critical to have a backup of all of your important data prior to embarking on any partition resizing project.

I’ve owned a Seiko Kinetic model 5M62 watch for about 8 years and I really liked the fact that it never needed batteries and would run for days without winding. The Kinetic watch is self-winding, and instead of using a spring to store the energy, it converts the mechanical motion into electricity and stores it instead. This gives it the convenience of a self-winding watch along with the accuracy of a quartz movement. However, a few weeks ago I noticed that it would stop running if I took it off for a few hours. Sometimes, when I was just typing on the computer and not moving my wrist around, it would stop running. Below is a picture of the watch.

I figured there was something wrong with the energy storage system, possibly a dead battery or bad capacitor. After a web search, I found out that the watch does have a battery, which is sometimes referred to as a capacitor, but it is indeed a battery. All rechargeable batteries eventually lose their ability to hold a charge and after 8 years, this one had simply worn out. The problem with changing it is that the Seiko Kinetic battery is not one of those standard watch batteries that you buy in a store and easily change by yourself. However, I found that it could be purchased from vendors on Ebay or other on-line websites like Swatchbattery.com for around $20.

In our disposable society, I’m sure this issue could have been an excuse to go shopping for a new watch. But once you become attached to a watch, and this one is water proof so I hardly ever take it off, it sort of becomes a part of you. I hated the thought of replacing it, especially because I felt it had many more years of service.

I started reading a few of the websites that talked about replacing the battery as a DIY project, but wasn’t sure if I was up to the task or had the necessary tools. I never had taken the watch apart and looking at the back of it, I didn’t think it would simply pop off like my previous watches that had user-replaceable batteries. I talked with the jeweler where I bought it and they told me that they would have to send it away for repair and thought it might cost $65 or more to replace the battery. The local jewelery repair shop had a similar assessment. So, being an adventurer and inveterate fixer, I decided to do it myself.

You can see from the image below that the watch had notches on the back of its case. This meant that it needed a special case opener wrench. 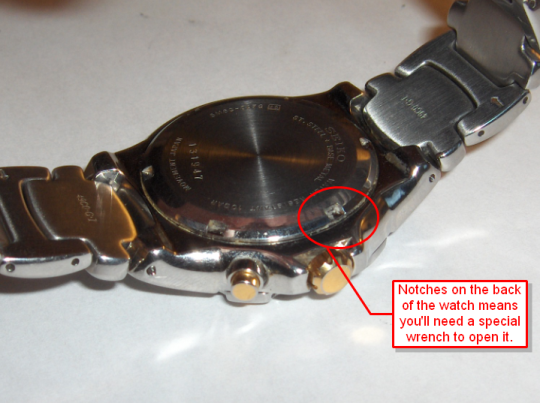 I decided to get a Jaxa style opener (shown below) which clamps down on three notches since it seemed like it would do the job better than the openers that only grabbed the case on two notches. These can be found on the Internet or at Harbor Freight for less than $10. 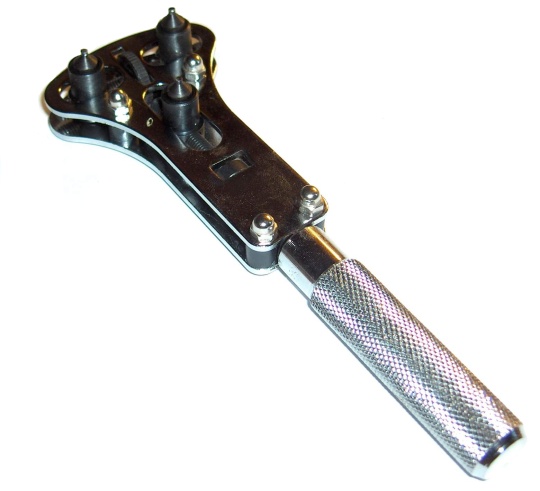 To make things easier, I decided to remove the watch band. Most of the watches I’ve owned had spring-loaded pins that were pretty easy to remove, but this model had pins pressed in that held the watch band in place. I was able to push them out with the tool shown below.

I used a paper towel to protect the watch and gently gripped it in a vice and was able to unscrew the back with the watch opener. It took a fair amount of torque to loosen the case back. In the image below you can see what it looks like inside. The battery is the brass-colored part in upper side of the image below. To get to it, you need to remove three very small screws. I had several small jeweler’s screw drivers around the house, but these screw slots are so tiny that I found it necessary to use a file on one of my screw drivers to make a very sharp tip in order for it to fit in the slots of these screws.

The center screw holds the winding weight and gear in place. These items can only go one one way as the shaft is keyed. Actually, they can go on two ways, but both ways are correct. However, you can put them in upside down, so pay attention to how they are installed as you remove them. The gear must mate up with a smaller gear so make sure that it does before installing the winding weight and screw. 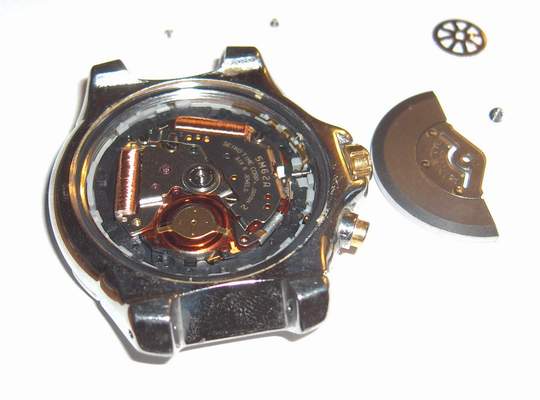 When you get all the parts out, they look like the image below. There are 3 small screws, the winding weight, a gear, a red mylar insulator, a battery hold-down clamp, and the battery. To re-assemble them, just (carefully) put them back together they same way you took them apart. You’ll find a pair of sharp tweezers useful to handle the screws and other parts. 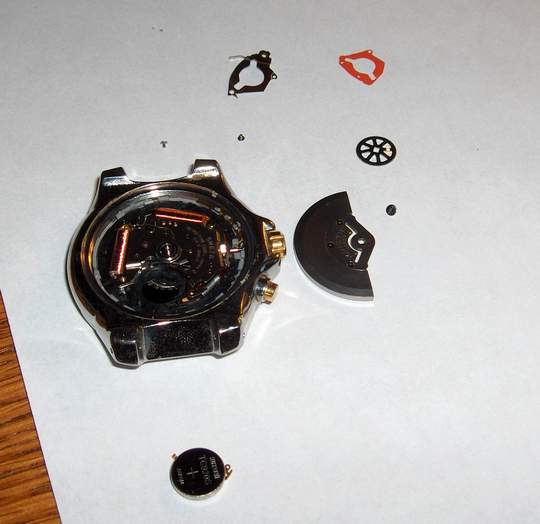 Here is the package I got from an online retailer. It came with a red mylar insulator, a hold-down bracket, and the Maxcell TC920S battery. 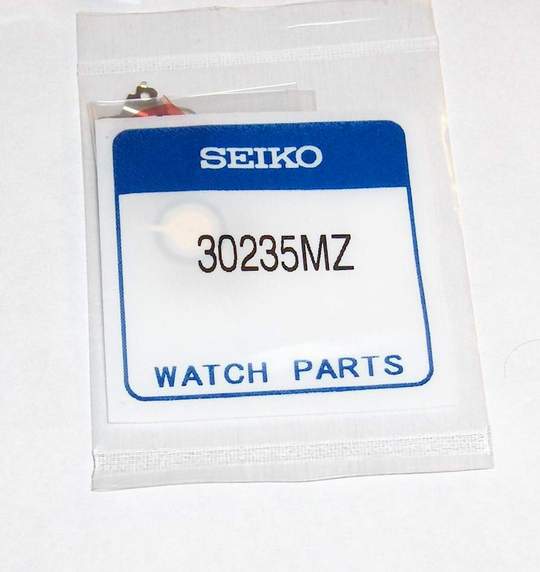 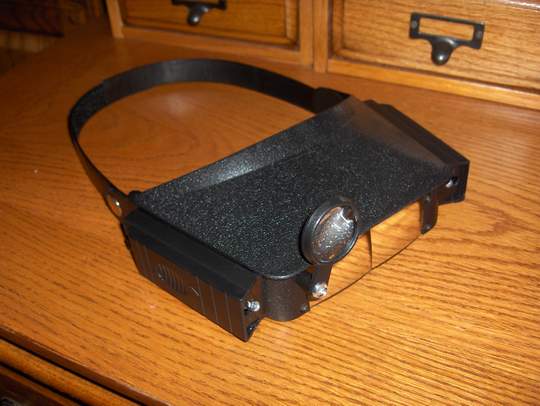 If you’ve stuck with me this long, I’m going to give you a bonus. I mentioned that I had owned the watch for 8 years so now I have a confession. I always wondered what the push-button at the 2-o’clock position was used for. Sometimes it would advance the second hand 5, 10, 20, or 30 seconds and then it would sit there and stop. Then it would start running after the time had caught up with it. I had no idea why it did this because I had never read the owner’s manual and don’t even know if I still have a copy of it. So, in case you’re wondering, here is a copy of the page from the owner’s manual I found online that explains it (hint: it’s a sort of ‘gas gauge’ for the battery): 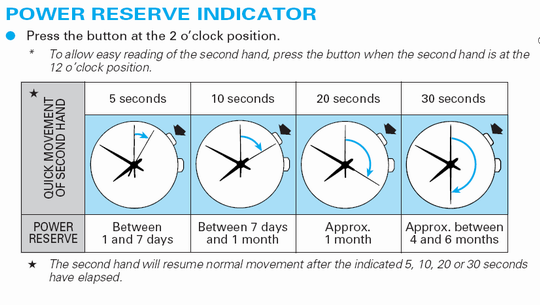 Incidentally, when the watch battery had begun to fail, it was impossible to get the reserve indicator to advance the second hand more than 5 or 10 seconds even after vigorous winding. Now with the fresh battery, it jumps forward 30 seconds whenever I push it.

Would you like to know how to correctly wind the watch and how much it takes to keep it moving for a day? If so, here is the explanation, again from the Seiko manual: 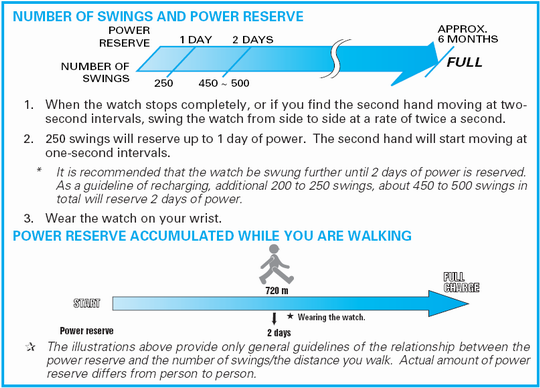 It would appear that if you walk more than 720 meters (about 1/2 mile) you’ll impart enough energy to keep it going for a two days. Here’s another interesting tidbit: If you see the watch second hand jumping 2 seconds at a time, that means the battery is low and that you have less than 24 hours of charge left on it.

So, there you have it, a way to resurrect a watch that should last for decades. If you have one of these Seiko Kinetic watches sitting in a drawer gathering dust because of a dead battery, I hope my explanation gives you the motivation to get it working again for minimal cost. Please feel free to leave a comment if you have any questions or just want to share your experience with other readers.

Does it seem like too much trouble or beyond your skill level to do this repair? If so, you may want to get in touch with John Safranek at KineticRepair.com in Denton, TX or call him at 940-239-9888. He’s a Seiko Kinetic expert and performs these battery changes starting at just $49.95.