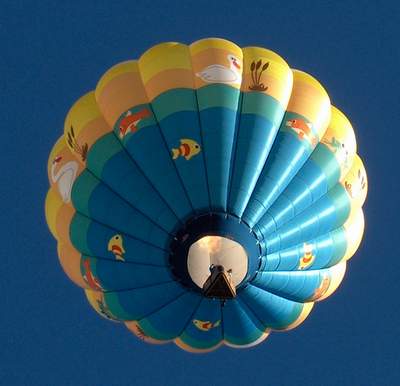 We had the great pleasure of having some Italian house guests last weekend. My friend Silvio and his son Davide came to the U.S. for a trade show in Charlotte, NC and decided to make the trip out to Colorado to pay us a visit. I first met Silvio in 1992 when I was working on an Agilent Technologies Headspace Sampler, which is manufactured in Italy. It astonishes me that 13 years later, the product is still in production. It’s a testament to the fine work Silvio did on the product, I’m sure. Davide would have only been 7 years old at that time. Today he’s a 20 year old college sophomore majoring in chemical engineering in Milan. He is a well-spoken young man now with a passion for music and science. He got to eat a donut for the first time, much to his delight, and thus walk in the shoes of the our national hero and cultural icon, Homer Simpson. 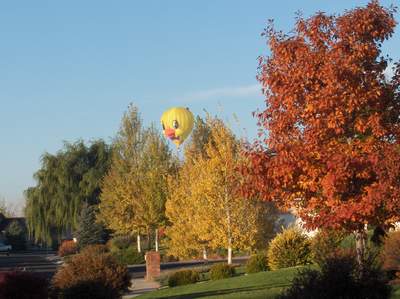 Terri and I have visited Italy several times and we stopped to see Silvio and his family each time. I know that somewhere we have a lot of pictures from Italy and I’d like to scan them into the computer eventually. I suppose if there were weblogs back then, I would be able to search for the details of each visit and link them here but the Internet was just getting its start back then. We always have a great time in Italy and hope to return there soon, perhaps next summer. We are already planning some motorcycle side trips through the Italian countryside with Silvio as our guide and hope to return the favor when he visits the U.S. again.

As you can see from the pictures, we had a balloon festival in Greeley and the wind was such that the balloons flew right over our house. I counted more than 30 at one time, but the local newspaper said there were more than 50 launched from the old HP site. 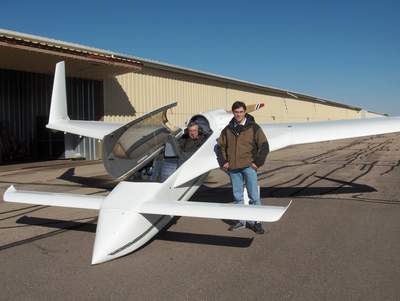 We also flew the LongEZ this time. Silvio and I share a passion for airplanes. He likes to fly the small RC planes and I like them at 1:1 scale, although I do have some limited RC experience. Silvio has flown with me twice before, the first time in Pennsylvania in the Piper Colt and the second time here in Colorado. The first time I flew with Silvio, we came across an accident when we attempted to land on the runway at New Garden airport in Toughkennamon, PA. I was rather surprised since I had never actually witnessed a plane have a crash before, but this was rather minor where the gear had collapsed on a Bonanza during landing. We landed in the grass field next to the paved runway and taxied around it. I told Silvio it was quite unusual to witness a plane crash, even though you read about them in the news all the time.

The next time we flew it was in Greeley and, although it was calm when we departed, it was rather windy when we landed. Upon landing we saw a small Kitfox airplane that obviously had a lot of trouble landing and had flown directly into a hangar. The plane was destroyed and the people had to be taken to the hospital. According to the NTSB report, the injuries were minor. I mentioned to Silvio how unusual it was to come across and accident like that. He just smiled and said to me, “That’s what you told me last time!” So I was a little apprehensive when we flew last weekend and was hoping that no other accidents would occur. The weather was great and we got a lot of aerial photos and, much to my delight, witnessed no accidents.

After the flying, we visited a local RC airfield where a lot of people were flying their airplanes. Most of the RC airplanes were large aerobatic-type planes and Silvio was able to pick out a few Funtanas, designed by Sabastiano Silvestri from Italy, who Silvio knows personally. I was amazed by the large enclosed trailers that several club members had that contained many large models. Later we visited two hobby stores in Greeley, Things with Wings, and Don’s Hobbies, both which have large selections of RC items where Silvio picked up some nice gifts.

On Sunday we traveled to Estes Park and stopped by the Stanley Hotel the place that inspired Steven King to write The Shining. Much of the book was written there in Room 217, although the filming wasn’t done there, contrary to popular legend. We also visited many of the tourists shops that line the main street in town. Then we went to Rocky Mountain National Park where the elk were out in large numbers. We also were able to get to the top of Trail Ridge road, the highest continous road in North America, which was quite a surprise since it’s usually closed due to snow by this time of year.