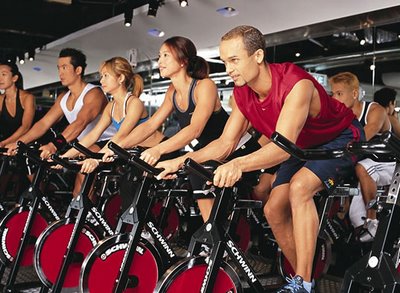 Every once in a while I read stories about people generating electricity with treadmills and bicycles by connecting them to electric generators. I read an article recently about a health club in Hong Kong that was using the energy from the human-powered exercise equipment to offset its electric bill. Whenever I read something like this, the first thing I want to do is put it in its proper context. I want to know if it’s being done for symbolic reasons to make people feel good in a ‘green sense’, or if it really has any potential to make a significant contribution to our energy needs. Before I get to that, I’d first like to talk about some terminology related to power and energy.

In the U.S., you will often see the term horsepower (HP) used to describe the size of an internal combustion engine or electric motor. Horsepower is an incredibly sticky term. By that I mean that the term ‘horsepower’ helps to put a vague concept into something easier to comprehend. It was first coined by James Watt in the 1800’s in order to quantify the rate of work that could be done by steam engines. He needed a way to put the power of a machine in some context that would be easy to understand. Watt recognized that an average horse could pull a load of 180 lbs at a speed of 2 mph. Back in those days, horses were not only used for transportation but were often harnessed to large diameter rotating wheels to perform functions like lifting loads of coal or water out of a mine. In some cases the apparatus could be adapted for grinding grain at a mill. If you do the multiplication, pulling a 180 lb load at a speed of 2 mph is equivalent to 550 ft-lb/sec which is the value used to compute horsepower today.

In most other parts of the world, the metric SI unit kilowatt (kW) is now used to describe mechanical power. I find it a little ironic because James Watt coined the term horsepower to put mechanical power in a recognizable context. Now, in order to honor him, we completely removed the context from the term by naming a unit of mechanical power after James Watt instead! In reality, the term ‘watt’ can be use to describe both mechanical and electrical power. Thus it makes it quite convenient to use watts so that it’s not necessary to use any computation to convert from mechanical to electrical power. With HP we need to do a little arithmetic to go back and forth. One HP is the equivalent of 746 Watts or .746 kW. Or, if you prefer, 1 kW is equal to 1.34 HP.

Back when I was in college, my roommate and his mechanical engineering classmates were trying to figure out a way to split a log using a .1 HP motor. I asked why he planned to use such a small motor and he said that it was a test of their skills as designers. A man can work at a rate of .1 HP and can split wood with an axe and so it stands to reason that a few smart MEs should be able to design a machine that was as efficient as a man. They wanted to store the energy in a flywheel, but couldn’t figure out a way to get it out of the flywheel to split the wood. I recalled my uncle telling me about a device he used that was like a conical screw to split logs that was attached to a wheel on a car. With the front wheels of the car chocked and one of the rear tires removed, the conical screw was attached to the hub with the wheel lugs. With the axle supported, the conical screw would spin and even at idle have no trouble screwing itself into a sizable log and splitting it. They looked around for the device and eventually found one and were able to adapt it to their large flywheel. A version of this log splitter is still sold today . With the conical screw in combination with their flywheel and tiny .1 HP motor they were able to split logs with great success. Upon looking at the arrangement, no one thought it was going to work, but it did and they were quite happy with the result.

Ever since that project, I have always recalled the number 1/10 of a HP or 75 watts in the context as what a healthy human could be expected to generate on a sustained basis. For periods shorter than an hour, a healthy human could generate about twice that amount or about 150W, and an elite athlete can generate nearly 300W (.4 HP) for as much as 8 hours. For very short bursts, a human can even exceed 1 HP.

This brings me back to the original question. If you had to generate your own electricity, assuming it was a full time job of 8 hours a day, how much of your own electricity could you generate? The answer is that if you worked 5 days a week, 8 hours a day at a rate of 75W, you’d be able to generate about 12 kWh of electricity per month. This is about 1.7% of what a typical U.S. household consumes. The value of this much electricity is around $1.20. That’s $.0075/hour. Yes, it means you would not quite generate a penny’s worth of electricity per hour of pedaling effort. But I’ll bet you’d be in great physical shape in no time.

I would be remiss if I didn’t include the food energy required to offset this new level of physical activity. The human body is about 20% efficient at converting food energy into mechanical energy so the 600 Wh you produce per day would need an additional 3000 Wh of food. This amounts to 10800 kJ or 2580 food calories. A typical basal metabolic rate for an average man is around 1900 calories per day, so if you were to add this level of activity to a sedentary lifestyle, you’d see some dramatic weight loss, assuming you didn’t more than double your food intake to compensate for the new hunger pangs you’d begin to feel.

So now when I read about human-powered generators, I recognize that you could use something like it in an emergency to power a light, or even a laptop computer, but it would not contribute in a positive sense to a sustainable energy program because you’d likely have to double your food intake which would cost much more than the 6 cents a day of electrical energy you could produce.

7 thoughts on “Electricity from Human Power”