LG is getting a lot of media coverage for its Solar Hybrid Air Conditioner (model F-Q232LASS) but so far, no one has bothered to do any technical analysis on it. Most blog articles have nothing but enthusiastic praise for it. So, please allow me to provide an alternate viewpoint. 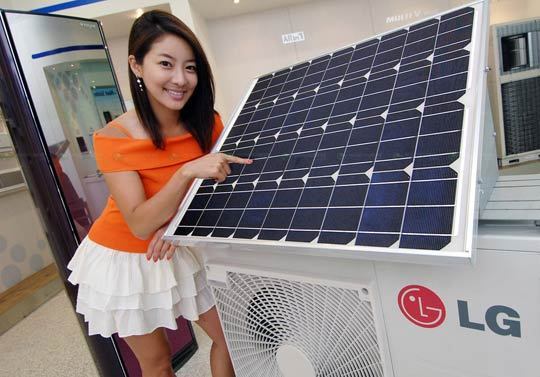 I think this is a product intended just for PR purposes. Some people may look at it and think it is a solar powered air conditioner. Much of the news coverage uses the unrelated logic of how much CO2 it saves or, even more curiously, how it’s like ‘planting 780 pine trees’. As a side note, when someone starts describing an energy benefit with the lifetime CO2 savings and avoids discussing actual costs, be aware that you’re about to be bamboozled. The solar panel on top of the air conditioning unit produces a small amount of energy; according to LG it’s 70 watts. In case you’re curious, that amounts to about $12 of electricity per year, assuming a cost per kW-h of $.10 and average capacity factor of solar panels. That also assumes the electricity it generates can be used by other appliances when the A/C unit is not running and I’m not sure if that’s the case or not.

The air conditioning unit is rated at 28,000 BTU/hr. Assuming a SEER of 13, that translates to a 2800 watt draw, not including the fan the circulates the air through the evaporator and the house, which can add another 900 watts or so. That would mean that there’s a 52:1 difference between the air conditioner’s energy draw and energy produced by the solar panel. I am assuming that there is a grid-tie inverter that puts the energy generated when the air conditioner is not running into your home to offset other energy consumption. If not, then the solar panel output would only be used when the A/C was actually running and that would reduce the $12/year of annual power generated considerably. Also of note is that most residential air conditioning loads occur from around 4-6 p.m. when people return home from work. At that time the sun is much lower in the sky and solar output is about 20% of a solar panel’s maximum rating.

An air conditioner needs to get rid of the condenser’s heat and so it’s best placed in the shade. In this case, however, the condenser would need to be placed in direct sunlight, which counteracts what it’s trying to do, namely to get rid of heat, so that would negatively affect its efficiency. In addition, the condenser needs unimpeded forced air flow which is generally done with a fan that blows air from bottom to top to get the added benefit of natural convection since heat rises, but this unit’s fan has to blow air from side-to-side because the solar panel on top would block bottom-to-top air flow. I should also mention that solar panels work best when they are cool so attaching them to a hot condenser doesn’t help their efficiency either.

You’d be better off with having a solar system that is completely independent of the air conditioning unit because it introduces too many compromises in each of the respective systems’ design goals.

Nice try LG, but this product is no better than one of those solar powered attic fans which is another idea masquerading as a solution to a problem that it doesn’t solve.

I should mention that I am a big fan of solar energy. We use a solar array to power our home and it is a net energy producer, generating more electricity than we use on an annual basis. I hope to someday use the excess for a plug-in hybrid car. The reason I felt compelled to write about this topic is because I just get tired of rip-offs and scams that prey on people’s trust (and ignorance) when it comes to energy savings schemes so I have to call them out.