I’ve been hearing an ad on the radio lately about a discovery that the power company doesn’t want you to know about from a guy named Frank Bates. He mentions that he could get in a lot of trouble for talking about it and calls the power companies and the government “incompetent, lying crooks who are counting on your ignorance and fear to keep your electric bills and heating bills criminally high.” OK, I’m intrigued, so what’s this guy selling?

He wants to show you the secret of how he beat ’em, and how you can beat ’em too. It’s described as a “weird” trick on the website. It sounds almost too good to be true. You can hear the commercial along with a video at the Power4Patriots website.

Upon looking further into what Mr. Bates is selling, I discovered it’s a CDROM and downloadable access to a series of pdf ebooks (about 300 pages total) and videos covering the topics of solar and wind energy. Much of it involves DIY information on how to build your own solar panels, wind turbines, and solar water heaters from components you can find in local hardware stores and online for less than you can buy equivalent off-the-shelf products. The value of this ‘package’ is $297, but with the 90% discount, the CD and downloads can be yours for only $27 + 2.99 S&H. After purchasing it, you’ll find that if you pay $67 more, you get a physical spiral bound book along with 3 DVDs that also cover solar and wind DIY projects which is basically the same material, just in a format that might be more convenient for you. If you turn that down, you’ll be offered the printed book for another $27. After that, you’ll be offered heirloom seeds for another $67 to help you through any upcoming societal collapse. So there’s a lot of upselling going on after the initial $27 investment. I’m also now on the email list and I suspect I’ll be hearing a lot more from the company in the future.

How do I know this? I know this because I invested the $29.99 in the ebook/CDROM product. After all, what kind of blogger would review a product he didn’t own? I gotta tell you, this guy’s good. I’m surprised I got out without spending another $134 for the physical book/DVDs and heirloom seeds.

You’d have to be living under a rock if you haven’t heard all the fuss about how Chinese solar panels are coming down in price so fast that they are putting companies out of business that were trying to manufacture solar panels in the U.S. Witness what happened with Solyndra and Abound Solar.

One of the ebooks and 6 of the videos are related to making your own solar panels. I was curious to see just how cheap these homemade panels would be and the book shows a bill of materials of $175 for a 65 watt panel. That’s almost $3/watt not including your labor, and the amount of labor looks quite substantial. I’d estimate the labor at 10 hours per panel or more. That’s not cheap, especially now that you can get manufactured panels that are $1/watt that are already assembled and guaranteed. The manufactured panels are designed to last 25 years, are safety agency-approved, and can withstand all kinds of weather, including hail up to 1 inch in diameter. So trying to roll your own solar panels would be a waste of time and money. And the cost of a solar system doesn’t just depend just on the panel cost. The inverter costs about $.50/watt which is quite expensive in the grand scheme of things, or about half of what you’d be paying for the panels.

And then there’s the installation cost. Of course, you can do the installation yourself if you’re capable and comfortable working on roofs. Once you add in the other ancillary parts and equipment, you can put together a solar system for about $2/watt these days using off-the-shelf components. That’s about half of what they cost just 4 years ago, thanks primarily to the drop in panel costs.

A typical house in the U.S. uses about 730 kWh in electricity per month. To satisfy this need, you are looking at approximately a 5 kW system. That system would cost about $10,000 for materials even if you’re handy and can do the installation yourself. With U.S. electricity rates now at an average at $.12/kWh, it would take about 10 years to pay for itself. That’s not too bad, considering most things you buy for your home will just depreciate over time and not save you a dime, let alone break even or start making you money in the long run. My grid-tied solar system is 5.6 kW and I haven’t purchased any electricity since it was installed nearly 4 years ago but I do get charged about $8/month to be connected to the grid. I have accumulated a surplus (about 5000 KWh) on the meter that could run an electric car for more than 20,000 miles.

The radio commercials imply that you could slash your energy bills and live free of these greedy utility companies but you cannot do that if you install a grid-tied solar system with net metering, which is the most common kind. To disconnect from your utility company, you’d need to have a battery storage system, a charge controller, and a backup generator for those times that you may have a few cloudy days in a row. A set of batteries that would hold a day’s charge of 24 kWh would cost at least another $4K and generator would add another $1K to it. So you’re looking at a much bigger expense when you talk about completely disconnecting from the power grid, I’d say at least $5K more. And those batteries would need to be replaced every 6 years or so. That makes the whole payback period kind of a moot point because of this extra recurring expense so unless you live in an area where there is no grid power, or you believe we are on the verge of complete societal collapse, it’s hard to justify an off-grid system when you can get away with the less expensive grid-tied solar system.

There are some other books included in the package related to making and installing a wind turbine (probably good for 5-10% of the average household energy needs), and some simple solar hot water and solar hot air DIY projects. Bonus materials include ebooks on surviving disasters, storing emergency water, and building a solar cooker.

So for $27, you get 10 ebooks all of which contain some useful information, especially if you’re into renewable energy or worrying about Armageddon. I didn’t feel ripped off afterwards, although the quality of some of the graphic images in the pdf files was pretty poor. I don’t know what the printed materials might look like, but the numbers on many of the charts were unreadable like the image shown below. 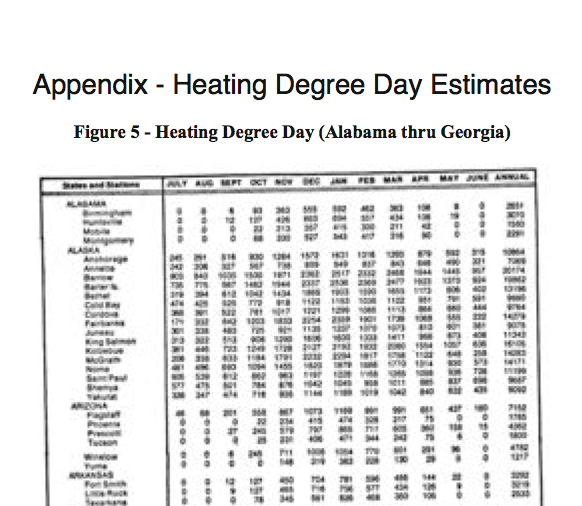 The poor image quality of many charts used in the ebook files makes the text unreadable.

I’m always intrigued when I hear an over-the-top advertisement for an energy product. Most of the time they turn out to be truly worthless and horrible investments. But this one is harmless enough, and you might even find a few good ideas for your $27. But don’t get your hopes up that you’ll take your electric and heating bills down to nothing without a significant investment in time and money even if you follow all of the DIY information in the ebooks.